One snap-shot of glory! 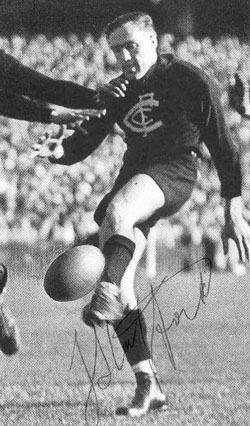 Recruited from VFA club Northcote, and the older brother of fellow Blue George Stafford, Fred was a solid 173 cm, 73 kg first-year rover in 1947 when Carlton went into the Grand Final as firm favourites to beat Essendon. In a close and tough encounter however, Stafford was well held by the Bomber defence and hardly sighted for most of the game.

At various times in the second half, selectors urged coach Percy Bentley to shift Fred away from the goals or replace him, but Bentley refused, each time insisting that Stafford would come good. Sure enough, with only 44 seconds left on the clock - and Carlton trailing by 5 points - the ball cleared the pack as the Blues drove forward one last desperate time. Fred flashed in from the half-forward flank, picked up the ball 25 metres out, and snapped the winning goal with his left foot. It was the stuff of legends. Perce Bentley's faith was vindicated, and Stafford was an instant Carlton hero.

Fred went on to play for six seasons, kicking 68 goals in his 102 games for the Blues from 1947 to '52. Despite that explosive beginning to his first class career, he was rarely the first man selected by the Blues afterward, and was 19th man in the losing GF side of '49. He passed away at the age of 83 in July 2009, but it was that split-second opportunity that he grasped - on the biggest day of all - that made him immortal.