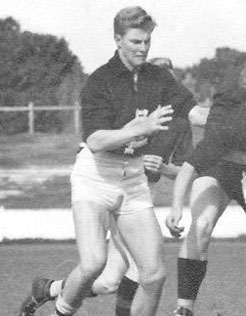 Another outstanding individual who passed through the portals of Princes Park on the way to high achievement in foreign lands, John Cheffers won international fame in the field of sports medicine after playing four games with the Navy Blues in 1955. An academic, researcher, coach, lecturer, author and public speaker who later served as the Director of the Australian Institute of Sport, he was based in the USA for much of his celebrated life, but never lost his love for the Old Dark Navy Blues.

On May 13, 1936, John Theodore Francis Cheffers was born into a working class family in Melbourne. His parents battled hard to give him the finest possible schooling, and he rewarded them by winning a scholarship to the prestigious Melbourne High School. In those early years, he often walked the 10 kilometres home from school to Kew because there was no money for the tram fare. He wasn't the greatest of students either, but he recognised the value of education and he later put himself through night school to achieve his matriculation (year 12) certificate while working full-time.

Cheffers was also a gifted all-round sportsman, excelling in schoolboy athletics in the high jump, long jump, pole vault and Australian Rules football. His dream was to represent his country at the Olympic Games, although at the age of 18 he was recruited by Carlton from Kew Amateurs. Clever, quick and good in the air, he made an immediate impact at Princes Park and was selected for his first senior game against North Melbourne at Princes Park in the opening round of 1955. The Blues demolished their opposition by 69 points that afternoon, and the dual exploits of Cheffers at centre half-forward, and Noel O’Brien at full-forward – who shared in a six-goal haul – prompted coach Percy Bentley to declare; “This is our year.” Unfortunately, that was not to be the case, because neither forward lasted out the season, and Carlton was to fade to seventh by year’s end.

Cheffers played well again in Carlton’s next two matches – a surprise loss to Hawthorn in round two, and another big win over Fitzroy in round three – but damaged a finger against the Maroons and was sidelined for two weeks. He came back into the side as 20th man in round 6 against South Melbourne and was on the field throughout the last quarter as the Swans edged out the Blues by 8 points at Princes Park. Shortly after that game however, Cheffers told Bentley and the club that he would not be continuing, because he desperately wanted to represent his country in the decathlon at the 1956 Melbourne Olympics, and there was simply no time for football.

As fate would have it, Cheffers dream did not come to fruition. While contesting the long jump during the 1956 Olympic selection trials, he landed awkwardly and tore an anterior cruciate ligament in a knee so badly that it brought an abrupt end to his track and field career. For a while after that setback his focus turned back toward football and he spent a year in the VFA with Box Hill, but the big leaps for marks and the agility that had been the hallmarks of his game were no longer there.

After retiring as a player, John officiated as a fitness advisor at Hawthorn, then turned to coaching track and field athletes. In 1958, he crossed paths with a promising 14 year-old named Jean Roberts, who agreed to take him on as her personal coach. Under John’s guidance, Jean won the Australian and US national discus and shot-put titles, while representing Australia at four Commonwealth Games and the 1968 Olympics.

By coincidence, Cheffers had also been appointed head coach of the Rhodesian (now Zimbabwe) Olympic athletics team for the ‘68 Mexico Games. However, Rhodesia was promptly banned from competition in Mexico because of the world protest against apartheid, even though the country had implemented a multi-racial Olympic selection policy. Believing that politics had no place in sport, Cheffers lobbied strongly against the ban, but when his efforts were rebuffed he returned to Australia to write a book highlighting what he saw as an injustice. A Wilderness of Spite: Rhodesia Denied told the story of Rhodesia's Olympic ban from the point of view of two black athletes and their coach. The following year, John assumed the role as head athletics coach for Papua New Guinea, leading them into the third South Pacific Games in Port Moresby.

Over succeeding years John maintained his hunger for knowledge and his commitment to learning when he took up an opportunity to teach at Temple University in Philadelphia, USA. He completed his Masters of Education in 1970 and his Doctorate of Education in 1973, before moving on to Boston University. There he created the BU School of Education’s Tuesday to Thursday Physical Education course - a program recognized internationally for its unconventional teaching and learning environment. While at BU, Dr. Cheffers also worked as a consultant to the International Olympic Committee and the New England Patriots NFL club on the issue of crowd control.

In 1984, Dr. Cheffers returned to Australia to take up the directorship of the Australian Institute of Sport from the inaugural Director Don Talbot, and served in the post for two years. His tenure culminated at the 1986 Los Angeles Olympiad, when Australia won a total of 24 medals (four gold, eight silver and 12 bronze). Throughout the rest of his life, Dr. Cheffers was a passionate supporter of the AIS, and did much to raise the Institute’s profile in the eyes of the Australian sporting public. After completing his term at the AIS, Dr. Cheffers returned to academia and was elected President of the prestigious AIESEP (Association Internationale des Ecoles Superieures d’Education Physique) serving in that capacity until 1998.

Over his crowded and influential life, John Cheffers published 18 books and wrote hundreds of articles for daily press publications. He also gave 22 major speeches worldwide, often participated in Distinguished Speakers appointments and prepared five special reports for the International Olympic Committee. Overall, he was employed by five countries (including Australia and the United States) to assist with Olympic preparation, and undertook almost 150 international teaching and coaching assignments.

Yet he was no lofty intellectual with disdain for the lower classes. Throughout his life John Cheffers was an advocate of free education and a fighter for the underdog – hence his support for the Olympic movement in Papua New Guinea and Rhodesia. He hated the scourge of steroids in sport and was a passionate supporter of women as both competitors and administrators. He followed the Navy Blues keenly, and beating Collingwood was one of his biggest joys. But perhaps his human qualities were best summed up two anecdotes. During his time at Boston University, against significant opposition, he instigated an on-site teaching program that included children from the poorest districts in the city, as well as those from the Perkins School for the Blind. And the last book he published, in 2011, was entitled Only the Educated are Free.

Following a bout of hospital care, Dr. Cheffers died in his sleep aboard an aircraft on October 28, 2012 at the age of 76, whilst en route from San Francisco to Sydney. At his funeral, one of his three sons remarked, “John was four hours out of San Francisco, sitting in first class, and halfway to heaven”.

The Argus, April 18, 1955 said of Cheffers' debut with Carlton;
CHEFFERS: Fast, lovely mark, and good kick. Could be a champion.