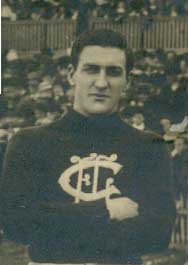 Barningham, who was born in Brunswick, played 56 games for the Blues through one of our most successful periods, playing in 40 wins in this time after being recruited from Carlton Districts.

Barningham debuted in Round 1, 1909, a 15 point loss to University, and was later a suspect in a vicious felling of the Students' key player in 1911.

Alex Barningham debuted for Brunswick, 15 May 1915, a follower, he was named among the Wicks' better players against Prahran.

Barningham also wore Guernsey No.20 whilst playing with Carlton reserves in 1911.

A leopard escaped from the Melbourne Zoo and wandered the streets of Brunswick terrifying the locals. It ended up in the backyard of the Waters family property. Miss Waters heard a commotion coming from the chook shed, she went and investigated, and found the leopard crouching in the fowl house, jaws agape and ready to pounce. The leopard followed her, but she was able to escape. Alex Barningham becoming aware of the situation, went for his cousin Joseph Lacey a "crack" rifle shot. It took three shots from Lacey's rifle to bring the big cat down.