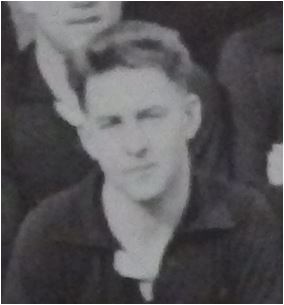 A rover who made his senior debut for Carlton the day after his 23rd birthday, Kevin Francis Hart wore guernsey number 36 in his five matches for the Blues in 1950. Born in Moreland, he honed his football skills at Preston YCW, before he served briefly as an 18 year-old with the Royal Australian Navy in 1945 - the last year of World War II.

In 1947 he was recruited by Fitzroy, and appeared in 19 matches for the Maroons over three seasons. He crossed to Carlton in 1950, and was selected as a reserve twice before he made his on-ground debut when Carlton took on Geelong at Kardinia Park in round 9 of that year. A huge crowd of 23,000 packed into the stadium, and the home fans were in delirium when Geelong led by five goals at three quarter time. But helped by a freshening wind, Carlton swamped the Cats in the last fifteen minutes to win by a point. Hart shared the roving with Fred Stafford and was effective, kicking two goals.

That was the high-point of Hart’s brief stay at Princes Park, because he played only twice more for the Blues, and finished up after a surprise 25-point loss to his former club in round 11. His career as at Carlton lasted five matches over exactly 70 days, and produced a 3-2 win/loss result.

In 1951 Hart accepted an offer to join Diamond Valley League club Macleod, and played there for two seasons to round off his football journey.