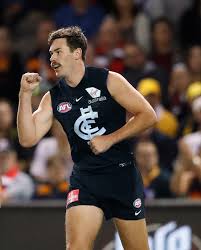 
Mitch McGovern joined Carlton from Adelaide during the 2018 free agency period. The Club secured the forward on the third day of the trade period for the Blues' pick Nos.26 and 28, a future fifth-round selection and SANFL player Shane McAdam (Sturt), in exchange for McGovern and Adelaide’s future third-round selection. Injuries limited the 23-year-old to 12 games this season, with the high-flying forward averaging 12.9 disposals and 6.5 marks. He achieved career-high disposals (20) and marks (11) against Sydney in Round 5, but his best game coincidentally came against the Blues in Round 7, where he took nine marks and booted five goals, six rebound 50s and earned himself two Brownlow votes.

McGovern brings finals experience (2016 and 2017) to Ikon Park and adds another player to the 23-27 age bracket on Carlton’s list. Potent in the forward line, McGovern ranked seventh in goal assists per game in 2017. His goalkicking was consistent again this season with 15 majors across 12 games. Dangerous around goals, he will no doubt greatly assist Carlton’s young and exciting forwards Charlie Curnow, Harry McKay and Tom De Koning in 2019 and beyond.

He is the younger brother of Eagles premiership star Jeremy and the son of former Sydney and Fremantle player Andrew McGovern.

McGovern prior to being recruited from the Adelaide Crows, he played for Claremont in the WAFL and prior to that North Albany.

\'Molly\' wraps up a Tiger.jpg