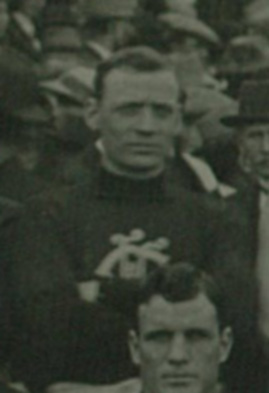 Patrick (Paddy) H. Mills, born in Dandenong, was a solid, reliable defender who played 83 games for Melbourne from 1903 to 1909 (after being recruited from Northcote), then headed north to join South Bendigo. Three years later, Carlton captain-coach Norman Clark approached Mills to make a return to the VFL with Carlton, and the 28 year-old agreed to give the Blues a hand.

Wearing guernsey number 9, Mills played his first game for the Blues in a back pocket - alongside ‘Hackenshmidt’ Clark - in a tight 5-point victory over Fitzroy at Princes Park in June, 1912. Coincidentally, it was Clark’s last on-field game for the Blues. He retired immediately afterward to concentrate on coaching.

Carlton wound up second on the ladder to South Melbourne after the home and away rounds of 1912, and comfortably beat Geelong to set up a Preliminary Final clash with eventual Premiers Essendon. On that day, Mills was prominent all game on a half-back flank when the Same Old and the Blues went hard at each other from the opening bounce, but Essendon were steadier in a crisis and triumphed by just four points.

There was a sensational postscript to that match when the Carlton committee suspended our champion centreman Rod McGregor for the entire 1913 season. McGregor was found guilty of disobeying directions given to him on the field by club captain Jack Wells, and ‘other incidents.’ But if that action was meant to stiffen resolve and improve team discipline, it failed badly. Carlton went into a tail-spin, ultimately finishing sixth on a 10-team ladder.

Earlier, Paddy Mills had begun supplementing his fitness (and his income) by embarking on a parallel career with Rochester in the Goulburn Valley District Football Association. Prior to 1939, GDVFA matches were played on a Wednesday afternoon, allowing many footballers (with or without their other club’s knowledge) to play two financially rewarding games each week.

So when discontent reached its peak at Princes Park in mid-1913, Mills decided that he had had enough of league football. He signed off on his Carlton career with another good performance at half-back in the Blues’ 50 point drubbing of University at Princes Park in July that year, then packed his kit in preparation for rounding off his playing career as captain-coach of Rochester in 1913-’14.

Mills also wore Guernsey No. 27 during the 1912 season whilst playing reserve grade football with Carlton.