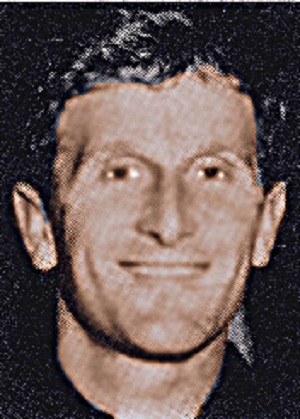 Peter McLean came to Carlton from Melbourne in 1966 and gave sterling service to the Old Dark Navy Blues for the next decade. Fresh from a Premiership with the Demons in 1964, he joined his former captain Ron Barassi at Princes Park, and proved a handy pickup in his 47 games over three seasons. He was 20th man in Carlton's 1968 Premiership win over Essendon, and later, a club Vice President and Chairman of Selectors.

McLean began his football career with amateur side Old Melburnians, but by 1964 was wearing guernsey number 36 for Melbourne under their legendary coach Norm Smith. The Demons met Collingwood in the Grand Final that year, and Peter was selected as 19th man. The game itself was a classic, won in the dying minutes by Melbourne when their back pocket player ‘Froggy’ Crompton followed his rover downfield, swooped on a loose ball, and kicked his first goal of the season to snatch the flag for his team. Meanwhile, sitting on the pine next to Smith – where he had stayed for the entire match – McLean was wracked by contrasting emotions. “Ken Emselle (20th man) got a run,” he said, some years later, “but I just sat there. It’s a very unusual feeling. I’d done enough during the season to feel part of the win, but I didn’t really feel part of it – if you know what I mean.”

McLean’s state of mind wasn’t helped by two occurrences over the following year. First, his friend and captain at Melbourne; Ron Barassi, created a storm of controversy when he accepted a lucrative offer from Carlton to take over as captain-coach of the Blues, and at the end of the season, the Demons asked McLean to fill a similar role with their Reserves team. For a 24 year-old who knew he still had something to offer, it was something of a snub. Enter Barassi, who knew that Peter was disgruntled with the Demons, and so told him that if he was prepared to back himself, the Blues’ number 36 guernsey was his for the taking. For McLean, the decision to go where he was most wanted was relatively easy.

He made his first appearance for his adopted club on his 25th birthday, when Carlton took on Fitzroy at the Brunswick St oval in round 3, 1966, and came away 32-point winners. From then on, Peter’s versatility shone through and he was effective in a variety of roles. He played 31 consecutive matches between round 6, 1966 and round 18, 1977, and finished off his second season with an honest effort at half-back in Carlton’s loss to Geelong in the 1967 Preliminary Final.

Almost precisely a year later, McLean’s career reached a pinnacle when he was named as 20th man in Carlton’s 1968 Grand Final side. Having accounted for the Bombers by six goals in the second Semi Final and earned a week’s rest, the Blues began the match as strong favourites. But the Bombers had come to play, and were right in it throughout the first half, in front of an enormous record crowd of almost 117,000. During the main break, McLean experienced a mixture of joy, trepidation and relief when Barassi told him that Kevin Hall was too injured to continue. Taking Hall’s place on a half-back flank, Peter did all that was expected of him as Carlton survived a last-quarter blitz from the Bombers. “As it happened, I got my chance when Kevin Hall was injured, and I managed to play the second half,” McLean later explained. “That was the highlight of my career – Carlton’s first flag for 21 years, Ron Barassi’s first as coach, and my first as a contributing player.”

Having achieved the ultimate goal of any League footballer, McLean then retired from the field in order to pursue his expanding business interests – but not before he was farewelled at a lavish Premiership dinner with the additional honour of Carlton’s Best Clubman award. He wasn’t lost from the club however – not by a long shot. In 1969 he was elected to Carlton’s Board of Management and, during the next seven years, was instrumental in the off-field dynamics that produced the glorious 1970 and ’72 Premierships. He was made a life member of the club in 1973, and the following year he stepped up to the role of Chairman of Selectors following the untimely death of Bert Deacon. In Bert’s absence, McLean became a close confidant and friend of coach John Nicholls. Later still, Peter also found time to return to his original club Old Melburnians as senior coach.

Then, on Saturday, April 4, 2009, the tragic news that Richard Peter McLean had passed away at the age of 68 – after a brief illness - was greeted with disbelief throughout the Carlton Football Club and the wider community. That night, the Blues wore black armbands in his honour when they played Brisbane at Docklands Stadium, and did him proud with a 19-point win.