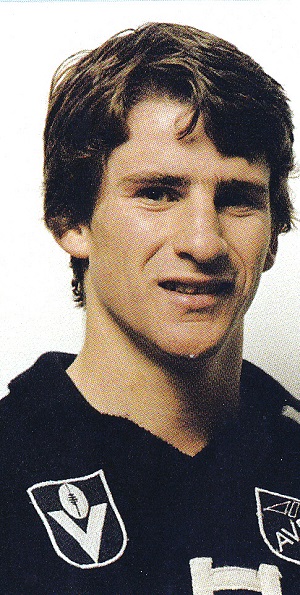 
Rohan Burke was recruited from Reservoir Lakeside in 1979 as a potential half-back. He was the son of former Carlton 87-gamer, Gerald Burke, who played with the club in the 1950s.

Wearing number 19, the 183cm defender played 18 games and kicked 9 goals for the Blues after debuting in 1981.

He was just looking to cement a spot as a tough in an under player in the mid-field when struck down by a knee injury he struggled for regular games after that. Burke was cleared to Richmond for the start of the 1987 season, he didn't play any senior games whilst at Richmond.

In 1980, Burke wore No. 49 whilst he was playing with the Carlton reserves team.

1978 Rd 16 – Doull about to handball with support from Southby, Brown, Pickett & Keogh