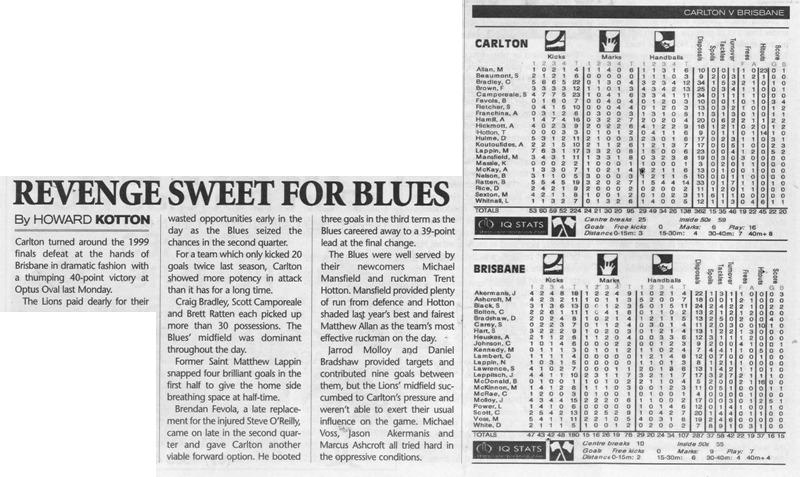 With the 2000 season starting about a month earlier than usual due to the Sydney Olympics being held in September, league football was being played under some very hot conditions in early March. This match was played in 33 degree temperatures which had coach David Parkin worrying about the conditions players were expected to perform under.

Thankfully for the Blues, Carlton handled the conditions and their opponents with ease, cruising away to a big win. The up and coming Brisbane midfield was unable to cope with the experienced Blues engine room, in particular Craig Bradley whose outstanding skill and endurance shone through in the baking conditions. Tagger Anthony Franchina ably held Brisbane’s running machine Nigel Lappin whilst Carlton’s own Lappin (Matthew) was fantastic up forward kicking 5 goals to be amongst the Blues best. Young ‘Pup’ Darren Hulme was excellent early and another young footballer Brendan Fevola kicked his 3 goals in the 3rd quarter. New recruits Trent Hotton and Michael Mansfield both impressed.

Craig Bradley's amazing endurance was on on show this day. As everyone stopped to a walk late in the last quarter, there was Braddles standing the mark in the middle of OO, jumping around waving his arms and quite clearly sending a message.