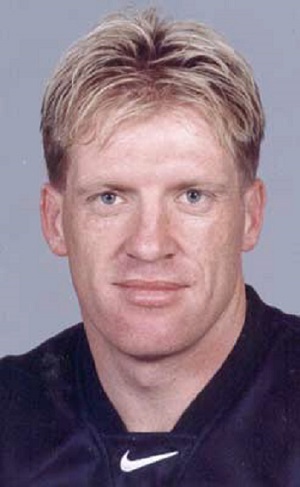 A courageous, versatile, blonde-haired right footer who was given a second chance by Carlton when his career at St Kilda prematurely ended, Dean Rice was a mainstay of the Blues’ 1995 Premiership team and a real asset to the club throughout his 118 games between 1994 and 2001.

Famously nick-named “Special Fried” by Rex Hunt, the 3AW radio caller, Rice was the nephew of former Geelong captain and 1963 Premiership player Colin Rice. After starting his junior football at Essex Heights, which at the time was aligned with Richmond, Dean joined Longwood in the Benalla District League to play alongside his two older brothers. The family connection with Geelong came into play when the Cats recruited him for their Under-19 squad, but he failed to progress further than Reserves level at Kardinia Park before he was discarded.

In 1986 - still just 19, Rice was given a trial by St Kilda and won a place on their senior list. He made his debut for the Saints early the following season and was soon a regular member of their team. Powerfully built, a clever mark and surprisingly quick, he found his niche on the wing at Moorabbin and represented Victoria in an interstate match against South Australia in 1989. By 1991 Dean had played more than 100 games for St Kilda, and had experienced finals football for the first time when the Saints fell to Geelong in that years’ Elimination Final.

However, that charmed run came to an abrupt halt during the 1992 pre-season, when Rice suffered a ruptured ACL ligament in his left knee. A full reconstruction was required, and he was off the field for the entire season. He came back to play 11 games in 1993, only to damage his other knee (thankfully, nowhere near as badly) against Adelaide in round 15. That turned out to be his last game for St Kilda, because the Saints decided not to gamble on his future and delisted him at season’s end.

Meanwhile, Carlton was smarting from a humiliating defeat by Essendon in the 1993 Grand Final, where the Blues’ lack of pace and desperation had been brutally exposed. Rice had his admirers at Carlton – including coach David Parkin, who was very happy when the 25 year-old was picked up by the Blues at pick 19 in the 1994 Pre-Season Draft, and given the number 23 guernsey previously worn by 1987 Premiership player Paul Meldrum.

Rice ran out for his first game in navy blue against Richmond on a Friday night in round 8, 1994, and was immediately under notice. Playing out of a forward pocket, he had taken two excellent marks on the lead and kicked his first goal for the Blues right on quarter-time, before disaster struck. In the first minutes of the second term, Richmond’s Tony Free fell across Rice’s rebuilt knee while both were scrambling for the football, and the pain told Dean immediately that another season was over. Still, Carlton retained their faith in him, and constant reassurance helped him through another reconstruction and the gruelling months of rehabilitation for a second time.

Almost precisely one year later, Rice returned to Carlton’s senior team in time for the Blues’ only two losses in 1995 – against Sydney in round 8, and St Kilda in round 9. From then on, the rampaging Blues swept all before them, and stormed to another flag by demolishing Geelong in a one-sided Grand Final. Rice was more than handy in that triumph – especially during the second quarter, when he kicked the goal that swiftly put down Geelong’s attempted resurgence.

Despite occasional pain in his rebuilt knee, Dean became a true utility as his career progressed – a reliable running half-back or winger, and a crafty defensive forward when required. In 1999 he had perhaps his most consistent season, playing 22 regular season games and four finals – including Carlton’s astounding Preliminary Final victory over Essendon, and the somewhat anti-climactic Grand Final loss to North Melbourne that followed a week later.

Another good season in 2000 produced 24 games (including two more finals) before Rice decided that the next season would be his last. Although a serious ankle strain in round 6, 2001 cost him 10 weeks on the sidelines, he returned to play another five games late in the year. By coincidence, his last match saw Carlton account for St Kilda at Docklands in round 20, with Anthony Koutoufides the star.

His AFL career may have ended that afternoon, but Dean wasn’t quite ready to hang up his boots for good. In 2002 he spent one last season with Scoresby in the Eastern Football League, then took over the reins as coach of country club Wonthaggi for another two seasons (2003 - 04), Rice also coached Berwick for two seasons (2011 - 12), Longwarry for two seasons (2013-14). Since 2006, he has held a number of senior positions with AFL Victoria in junior development, training and education.

More recently, Dean’s very promising son Bailey Rice was eligible to join either Carlton or St Kilda as a father-son selection in the 2015 National Draft. He trained at both clubs, but eventually chose St Kilda and was taken as a third round pick by the Saints at number 49.