An absolutely unforgettable day for every Carlton supporter as Alex Jesaulenko, Adrian Gallagher and ex-Richmond star Bill Barrot shared 20 of Carlton's 24 goals for the match while the Blues destroyed South Melbourne at Princes Park. The Navy Blue onslaught was led by ‘Bugs’ Barrot, who free-wheeled his way from the centre and kicked six superb goals in a Best on Ground display. Almost as good was rover Gallagher, who joined in the party to boot seven, while at full-forward, 'Jezza' was at his spectacular best and matched Gallagher's score. Barrot's 6 goals from the centre were some recompense for the agony he had similarly inflicted on Carlton supporters before he had emerged from the dark side.

Apart from his team allowing the wooden spoon-bound Swans six goals in the third term, Carlton coach Ronald Dale Barassi would have had little to chide his charges about after this game - although we're sure he found something! 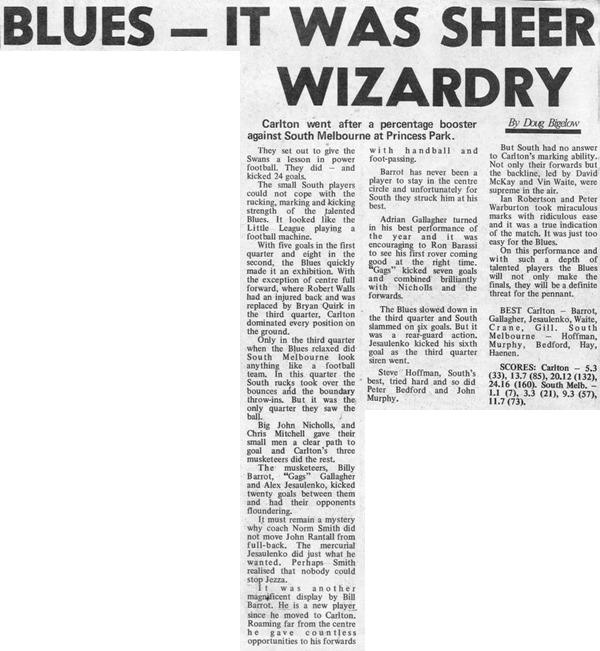 Debut : Peter Warburton
Interesting Fact : Phil Pinnell kicked his first goal for Carlton in this, his 50th match. Overall, he booted 5 goals in his 173 matches for the Blues.