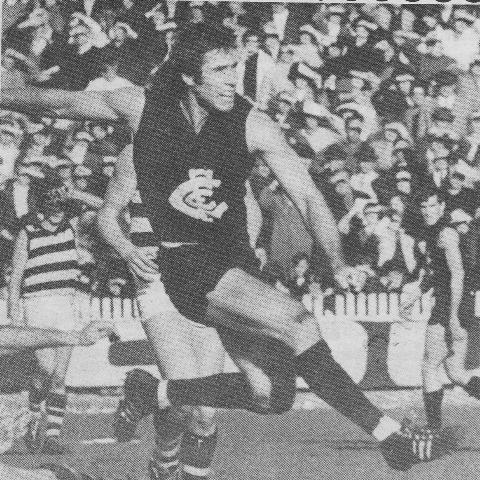 Before making his way to Princes Park in 1971, Billy Barrot was a champion centreman at Richmond for ten seasons. In 120 games for the Tigers, he had kicked 91 goals, played in two Premiership teams, won Richmond's Best & Fairest, and represented Victoria on 11 occasions. Only two years beforehand, he had been one of Richmond’s stars in their 1969 Grand Final victory over Carlton.

Originally from Jordanville in the south-eastern suburbs of Melbourne, Barrot was an explosive player with outstanding stamina and all the skills, but he was also notoriously difficult to coach. His time at Richmond, while very successful, was anything but harmonious. Even so, the end of the 1970 season Richmond stunned the football world by announcing that they had agreed to trade Barrot to St Kilda, in return for the Saints' dual Brownlow Medallist Ian Stewart.

It was an epic blunder by St Kilda. Barrot played well in the first round of the season away against Geelong, and kicked three goals. But in his second game - against North Melbourne at Moorabbin, he infuriated his coach Allan Jeans so much that he was benched at half-time. The pair then clashed in the rooms afterward, and Barrot walked out – never to return. Meanwhile, Stewart was already starring for Richmond, on the way to winning his third Brownlow Medal.

Over at Carlton, memories of Barrot's exploits in the '69 Grand Final were all too fresh. Blues coach Ron Barassi – himself a stern disciplinarian - was confident that he could get the best out the 27 year-old, so Barrot was offered, and accepted, an opportunity to continue his career with the reigning premiers. Wearing guernsey number 24, Billy officially became a Blue when he took up his customary role in the centre against Hawthorn at Princes Park in round 9, 1971, however it wasn’t a happy debut. Although he did some good work and was credited with 19 possessions, Carlton was hammered by ten goals and dropped to sixth on the ladder.

In his second match, against Fitzroy at Princes Park in round 10, Barrot racked up 27 possessions in a 15-point victory that revived Carlton’s finals prospects. Three weeks later he was Best on Ground with 37 disposals in a narrow win over Essendon at Windy Hill, before slotting six goals in a one-sided demolition of South Melbourne at Princes Park in round 17. By then Blues fans had taken Billy to their hearts, however it all fell apart in the last match of the season against Collingwood. Carlton had failed in their quest for consecutive flags by then, having missed the finals by two points and a huge amount of percentage. Although only pride was on the line, Barassi hated losing any game, particularly to the Magpies. He demanded a maximum effort, but in the first half he didn’t get it and Carlton trailed by 32 points at the long break. In the rooms, Barassi exploded and tore strips off some key players, including Barrot - who fired back with both barrels.

Years later, defender Ian Collins remembered that confrontation; “at half-time against Collingwood, Barrot told Barassi he wasn't going to play for him any more. Barassi said ‘thats good - give us your jumper,’ and that was the end of Billy with Carlton. We were six goals down, but we went back out and won the game. Although it was hard on Bill, the other seventeen reacted to it positively - which is what Barass wanted.” Barrot’s 12 games and 10 goals for Carlton gave him career totals of 134 and 105 respectively. Although he left the game prematurely, his list of achievements came to be envied by many who had much longer careers.

After being delisted by the Blues, Billy trained with North Melbourne throughout the 1972 pre-season, but wasn't offered a contract. He then joined VFA club Oakleigh under former Melbourne champion Bob Johnson, and enjoyed a spectacular season that culminated in the Oaks’ 44-point Grand Final victory over Dandenong. In 1973 he was appointed captain-coach of South Australian club West Torrens, only to resign midway through the following year in acrimonious circumstances (he played 12 games and booted 8 goals whilst at West Torrens). Back in Victoria, he returned to Oakleigh as senior coach for a couple of seasons, before retiring from the game in 1976 to take up training racehorses.

Articles: Despised to Blue: Players recruited for killing the Blues!