New-found confidence and belief saw a depleted Carlton edge out Port Adelaide by 2 points at Docklands.

Carlton fans at Docklands for this Sunday afternoon match against Port Adelaide will long remember the roar that almost lifted the roof off the stadium late in the last quarter, when Matthew Kreuzer kicked the goal that won the game for the Navy Blues. Battered and depleted, Carlton had lost Levi Casboult to a serious knee injury in the first minutes of the match, before Kreuzer, Patrick Cripps, Lachie Plowman and Ciaran Byrne all required medical attention at various stages. But running on new-found belief, raw courage and persistence, Carlton surged to a sensational victory from 17 points down midway through the final term, igniting the club, its supporters, and the competition.

The Blues named an unchanged team in their quest for a fourth successive win, with the lead-up to the match honouring career milestones by two of the clubs’ leaders; Kade Simpson (250 games) and Michael Jamison (150). Just under 27,000 fans (a big contingent of the Power faithful amongst them) thronged the stadium at the opening bounce, to see a fierce opening that came to an abrupt halt when Casboult took a trademark grab deep in Carlton’s forward 50, then crashed to the ground clutching his knee. Dread descended on the Blues’ masses as Levi limped off, even as Andrejs Everitt took the kick to draw first blood for the home side. 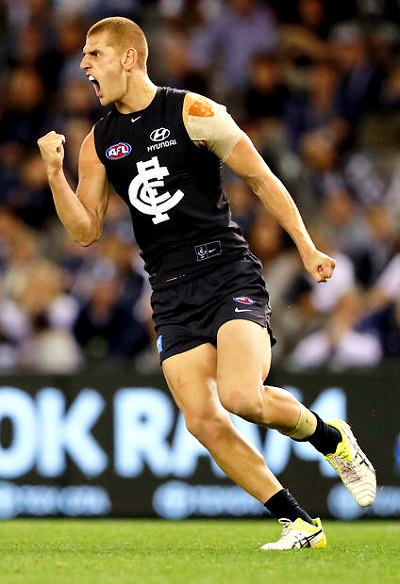 As Carlton coach Brendon Bolton re-organised his team, Sam Rowe went forward to fill Casboult’s role, leaving Plowman and Jamison in the key defensive posts. It didn’t take long for Port Adelaide to open their account, and they had outscored Carlton by 9 points at quarter-time. Tackling was fierce from both sides and turnovers were frequent, while the bounce of the ball favoured the visitors throughout the quarter - and indeed throughout the game.

The second quarter began with a Zach Tuohy special, when the Irishman ran onto a Cripps handpass and bombed a long goal from outside the 50-metre arc. Matt Kreuzer had established early dominance in the ruck, but he was felled by a knee to the midriff at a centre bounce and was helped from the field as Carlton - inspired by Simpson and Sam Docherty down back, plus Cripps, Bryce Gibbs and Ed Curnow in the midfield – piled on three unanswered goals to get within a kick of Port Adelaide approaching half-time. Kreuzer was back on by then, just as Plowman went down when the knee of Port’s huge forward Charlie Dixon crashed into his lower back in a marking contest. Like Kreuzer, Plowman left the field for some minutes and was restricted from that point on, but he stuck to his task and played out the game. Right on half-time, Port Adelaide kicked their eighth goal to take an 11-point lead into the long break.

The third quarter should have begun with a goal to Port captain Travis Boak – who was being kept under a tight rein by Ed Curnow – but his set-shot from close-in missed. Then Dennis Armfield broke from half-back for the Blues, and his long kick found Jed Lamb dead in front for full-points. Next, Bryce Gibbs pounced at right half-forward and his lovely right foot around-the-corner shot evened the score. Port kept coming however, and their star midfielder Chad Wingard stepped up, adding two majors with solo efforts to put the Power back in front by five points approaching three-quarter time. It was then that Cripps twisted in a tackle and fell clutching his right knee. Bluebagger hearts sank when he was helped down to the medical room, but he rejoined the huddle ahead of the most significant 30 minutes of football from Carlton for many years.

In the first minute of the final stanza, Sam Rowe used his strength to outmark his opponent, then kicked truly from close in to put the Blues one precious point ahead. A flukey bounce advantaged Port Adelaide once more when a kick to the goal mouth bounced through, before Dixon dodged around two defenders and goaled again. All at once the Power were travelling like winners, with a 17-point lead and 10 minutes to play against a team of walking wounded.

The Carlton fight-back began with Liam Jones, who took a contested mark 40 metres out and steered the ball right through the middle. Within in a minute or so, he was awarded a free-kick 10 metres further out, but that shot missed to leave the Blues trailing by 10. From the kick-out, a Port defender tried to break clear, only for Liam Sumner to run him down in a driving tackle, right on the 50-metre line. Awarded the free-kick, Liam stepped up and drove the ball home to make it four minutes to play, and four points the difference. Then Carlton surged forward again, and Sam Kerridge, under pressure in a milling pack, fired out a 10-metre handpass backwards to Kreuzer. The big fellow steadied, and the Carlton crowd all but lifted the roof off the stadium when the ball split the posts to put the Blues back in front.

In the last two minutes Port Adelaide tried desperately to set up another attack, but with two extras behind the ball, Carlton’s defensive discipline held. The excitement among the crowd, and the emotion among the Carlton players on the final siren was a moment to be savoured by a club that had been wallowing in mediocrity for far too long. Not for the first time in 2016 under Brendon Bolton, Carlton played with confidence, intensity and undeniable self-belief, with Bryce Gibbs (30 disposals, 6 clearances, 7 tackles) Sam Docherty (33 disposals, 13 marks, 7 rebound 50s) Patrick Cripps (30 disposals, 6 clearances) and Matthew Kreuzer (38 hit-outs, 15 disposals, 6 marks, 2 goals) leading by example.

Having climbed to 11th place on the ladder after this triumph, the Blues were relieved after the game when scans revealed that the damage to Casboult’s knee was not as severe as first feared. Levi had suffered bone bruising, and would be sidelined for only one week. In another remarkable recovery, Matthew Kreuzer underwent port-match surgery to repair a minor tear in his left knee cartilage, and he too, was to miss just one match. 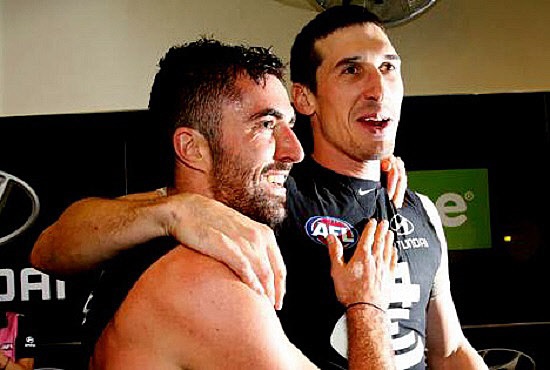 250 Games : Kade Simpson
150 Games & Last Game: Michael Jamison
First Brownlow Vote: Sam Docherty. Interestingly, this would be his only Brownlow Vote in his B&F award winning year....
Winning Streaks : Carlton made it 4 in a row with this win, the first time we had achieved this since 2011. We would not win 3 in a row again until Season 2019
Winning Streaks: This was Carlton's second win in a row against Port Adelaide - not normally a big stat, but unusual given our lack of success in 2015.