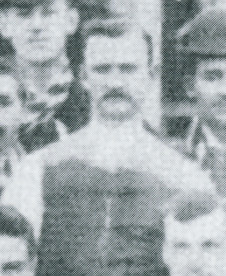 1889 July 08
Lorraine was one of Carlton's better players in his first match for the Blues in the loss to Geelong at the M.C.G.
Lorraine was recruited from the St.Kilda club.
(The Argus July 10)

Jack Lorraine is listed as one of Carlton's better players in 1890.
(The Carlton Story, H.Buggy and H.Bell p67)

1891 Elected Captain for season 1891 by a meeting of players at the Carlton Football Club's general meeting held at the Hibernian Hall Swanston Street, on Wednesday 25th March.
(The Argus, page 8, Thursday 26th march 1891)

1891 The Coburg Leader writing about the Brunswick vs Carlton pre-season match on April 18, said the newly appointed Carlton captain Jack Lorraine was once a St. Kilda supporter.

1891 Captain until he retired on account of injury, Walton took his place.
(Centenary Souvenir of Carlton Football Club. p19)

1892 May 29
South Adelaide played Melbourne at the M.C.G.
The Advertiser reports that "Lorraine the old Carlton captain donned the Melbourne colours."

1892 June 11
Lorraine was named in the Melbourne team that played Geelong on the MCG.

1895 The Western Argus (Kalgoorlie) August 22 p5), reported that J. Lorraine was the 1895 captain of the White Feathers Football Club in the gold town of Kanowna which was 20 miles east of Kalgoorlie.

1896 January 07
The West Australian January 18, picked up from the Melbourne papers that former Blues Jack Lorraine and Jack "Jigger" Moorhouse were in Melbourne and would soon be returning to the West.

1898 March 19
The Kalgoorlie and Boulder Standard (p6) cricket article;
"Without doubt Jack Lorraine, the Feather skipper won the match for his side by his excellent exhibition of batting. His runs were made when badly wanted, and the erstwhile Carlton footballer is to be warmly congratulated on the nerve he showed and the ability he displayed."

Kanowna is located 20 miles east of Kalgoorlie and is now a ghost town. It was gazetted in 1894 after gold was discovered the previous year. It's population had risen to over 12,500 by 1899, however the gold began to run out and during the Great Depression of the 1930's the railway was closed, and in 1953 the town was abandoned. (wikipedia)
The town once had 16 hotels, two breweries, and an hourly train service to Kalgoorlie, now, nothing remains except for the railway platform and the two cemetries.