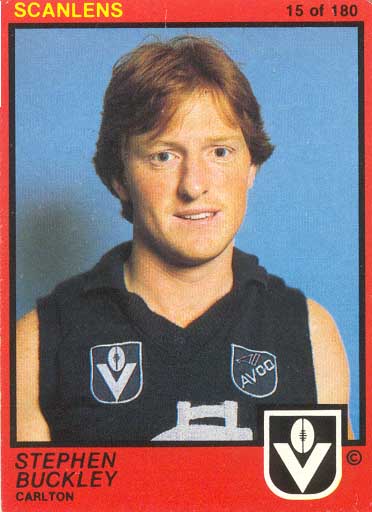 Stephen Buckley’s most unique gift for his 21st birthday came from the Carlton Football Club. Three days before that special occasion, he played the first of his eight senior games for the Blues against South Melbourne at Princes Park in round 4 of 1980.

The eldest son of former Carlton ruckman Brian Buckley, and the older brother of Mark Buckley, Stephen was a popular clubman who worked his way up through the Blues’ Under 19 and Reserve squads to eventually gain a place in the reigning Premiership team – much as Mark would do two years later. Both Buckleys were recruited from that great nursery for League footballers; St Mark's College, Fawkner.

A capable ball-winner with good skills on both sides of his body, Stephen got his chance at senior level when his namesake, Jim Buckley, contracted influenza and was a late withdrawal from the side selected to play the Swans. Stephen took Jimmy’s place on the bench, and was part of an emphatic 57-point victory on debut.

Jim Buckley returned to the team the following week, and from then on Stephen had to be content with the odd game off the bench. His best opportunity to shine came in round 14 - the return match against South Melbourne at the Lake Oval. Stephen started in the centre that afternoon, and got plenty of the ball as Carlton hammered the Swans by 39 points. But that very weekend, the club announced that we had signed former Melbourne captain Greg Wells, so from then on, the pivot in Carlton’s senior side belonged to the blonde ex-Demon.

Stephen wore his number 39 guernsey in his final game for Carlton in round 17, 1980 against North Melbourne, when the Blues suffered a final-quarter fadeout and were by thrashed by five goals. Ironically, he later made a comeback with the ‘Roos in 1983, to play two more senior games.

Buckley also wore No.51 in the 1977 season whilst he was playing with Carlton's reserves team.