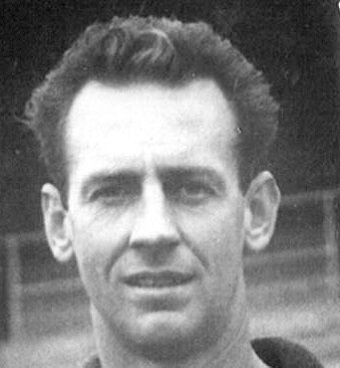 
A long football apprenticeship finally ended for Brian Buckley – son of former Fitzroy ruckman Jack Buckley - when he played his first senior game for Carlton against Collingwood at Victoria Park in round 16, 1956. More than five years earlier, Brian had been recruited as a 16 year-old from VFA club Coburg, and on his way up through the ranks had played in the Blues’ 1951 Under-19 Premiership team.

Buckley realised his long-held dream on the day after his 21st birthday, when Carlton triumphed over the Magpies by 13 points. Throughout the next ten seasons, he became one of the most popular Carlton players of his era – not so much for his spectacular play or goal-kicking prowess – but rather for his rock-solid reliability in defence for the Blues. A capable tap ruckman whose strong marking was his biggest asset, he regularly filled in at full-back, but was generally most valuable while minding the opposing ruckmen in the pocket.

Brian played in a lean period for the Blues, with his only finals appearances coming in 1957 (when he was 19th man in Carlton’s Semi Final loss to Hawthorn) and 1962 (when he was consistently good throughout a tough series of finals games, only to miss out on a place in Carlton’s Grand Final team because of injury). He wore guernsey number 4 in all but the first three of his 116 senior matches, and kicked 6 goals from his rare forays into the forward line.

On departing from Princes Park, he was appointed captain-coach of Port Melbourne in 1966, and took the Borough to a VFA Premiership in his first season. Leading his team in the ruck, he had a young Peter Bedford playing in the centre, and another ex-Blue; Barry Schmidt on one half-forward flank.

Buckley coached Port until 1968, making the finals in all of those seasons. In the 1967 Grand Final against Dandenong, Brian was involved in a controversial episode when he threatened to take his team off the ground in protest at what he saw as incompetent umpiring. Only the intervention of Port's secretary Norm Goss – who insisted that Buckley “get on with it,” allowed the match to continue, with Port going down to the Redlegs by 25 points.

By 1978 Brian was back at Carlton as team manager of the Under 19 side, providing advice and support to coach Bryan Quirk while the team won successive Premierships in 1978 and ’79. Making that 1979 flag win all the sweeter for Brian, his then 17 year-old son Mark represented the Blues that afternoon on a half forward flank. Later, both Mark and his older brother Stephen would add their names to the proud list of father-sons to play for the Old Dark Navy Blues – Stephen in 1980, and Mark two years later.

Throughout the rest of his life – which ended after a long illness on August 2, 2014 (the eve of his 79th birthday) Brian was an enthusiastic member of the Carlton Past Players. His contribution was recognised, and his memory was honoured, when the Blues wore black armbands in their match against the Gold Coast Suns at Docklands on the following Saturday afternoon.