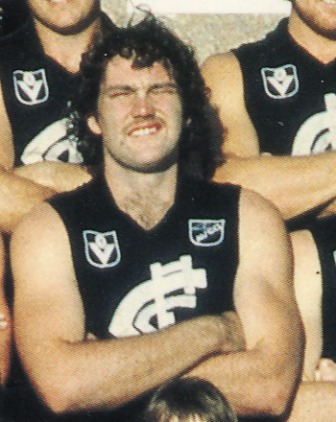 Stephen Easton's father Kevin was a handy ruckman/forward in his 28 games for North Melbourne in the early 1950's, and his strapping son showed the same potential in his first year at Arden St in 1978 (he was originally from Bulleen-Templestowe). From then on however, Steve couldn't demand a regular place in the North seniors, so after 31 games and 31 goals for the Roos in four seasons, he was cleared to Carlton.

Easton joined one of the greatest teams of all time, on the brink of a third flag in four years - but also a team whose key ruckmen; Mike Fitzpatrick and 'Wow' Jones - were nearing the end of their careers. It was a big opportunity, but unfortunately, one Easton wasn't able to grasp.

He played only the single game for Carlton in 1982 and was delisted to make way for another promising import - Justin Madden. Easton lined up with VFA club Port Melbourne for the 1983 season.

Easton coached second division team Whittlesea in 2001 and 2002, he had previously coached Division 1 teams Northcote Park (1996 to 2000) that it included premierships in 1997, 1999 and 2000. He also coached Lalor (two stints including premierships from 1991 - 1993). One of the junior footballers at Lalor Lance Whitnall who was a waterboy during these flags would later captain the Blues.