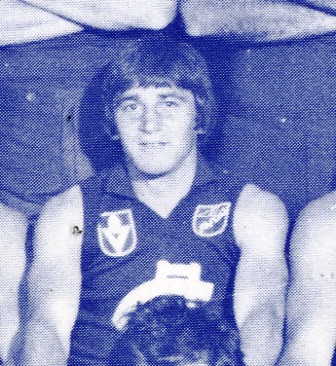 Tony Pickett played 60 games for Carlton, commencing with a burst in season 1976 when he won our Best First Year Player Award and earnt a top 10 finish in the Best & Fairest. He also kicked 32 goals.
Recruited by Carlton, Pickett made an immediate impression, kicking four goals in his debut game against Collingwood and playing 24 senior games in his first year.

After commencing at North Hobart, dynamic wingman Tony Pickett burst onto the Tasmanian scene in 1974 and 1975, winning consecutive best and fairest awards in strong North Launceston combinations under Tony Haenen and Peter Daniel. Nicknamed 'Fence' he was recruited from North Launceston, where he played seniors between 1973 and 1975 after coming through the club's Under 19s. He won their senior Best & Fairest award in 1974 & 1975, and was a member of their 1975 senior Premiership side (after playing in the losing senior Grand Final side of 1973). He also represented the Northern Tasmanian Football Association (NTFA) in 1974 and Tasmania in State of Origin football in 1979. Pickett finished his playing career with City South and captain coached them to the NTFA grand final in 1980. He served Tasmanian football in the high schools of north east Tasmania for many decades following his retirement from senior football.