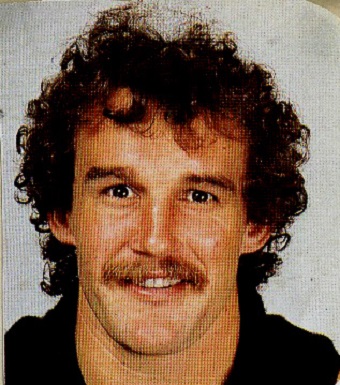 Kenneth John “Bomba” Sheldon was a key member of Carlton’s famed mosquito fleet of the nineteen-seventies and eighties - a clever, courageous rover who became more of a utility as his career progressed. Carlton’s list in those great years included the names Ashman, Harmes, Buckley, Marcou, Johnston, Armstrong and Keogh. All measured under 183 cm, and all were versatile, brilliant footballers.

Ken hailed from Mitiamo in north-central Victoria, and honed his skills in the Loddon Valley Football League, which in those days was part of Carlton’s recruiting zone. Coached by his father Jim, he won Mitiamo Juniors Best and Fairest award in 1973 and 1974, and played senior football alongside his dad before his 15th birthday. In 1976 Sheldon was invited to Princes Park, where he bypassed the Under-19s to play a number of Reserves games prior to representing Victoria in the National Under 17 Teal Cup. Selected in the All Australian team at the end of that carnival, Ken then returned home to be one of Mitiamo’s best players during the LVFL finals. He kicked four goals in the Super Roos second-semi final defeat, then featured in the clubs’ best players when Mitiamo fell to Bridgewater in the Grand Final. Later that same year, he was included on a wing in the LVFL All-Star team before being granted a clearance to Carlton.

With the Blues, Ken was given the nickname “Bomba,” because his team-mates believed that he resembled the lead character in a hit TV comedy of the time, “Bomba, the Jungle Boy.” He was also honoured by succeeding Syd Jackson as custodian of the Blues’ iconic number 5 guernsey, after wearing number 37 in his first senior game as an eighteen year-old in June 1977 at Princes Park, against Geelong. Sharing the roving duties with Tony Pickett that afternoon, “Bomba” made an impressive debut, picking up 21 possessions, 5 marks and his first career goal in a 7-point win to the Blues. Six weeks later, Ken kicked 6 goals against Melbourne at VFL Park in just his third senior match, and Carlton knew that they had picked up a very special player.

Sheldon experienced the thrill of finals football in his second season with the Blues, starting from the interchange bench in the 1978 Elimination Final victory over Geelong, followed by a heavy loss to Collingwood in a spiteful Semi Final. By then he had played 24 games, primarily as a goal-kicking rover who was equally effective in the centre or on a wing. Under their inspirational captain-coach Alex Jesaulenko, Carlton became the form team of the competition in 1979, finishing two games clear on top of the ladder. On Grand Final day, looking for their twelfth flag, the Blues met Collingwood on a wet and heavy MCG, and Sheldon took centre stage in a famous incident. Entering time-on in the last quarter, Carlton led by just four points, but Collingwood were surging when the ball was worked forward and gathered by Wayne Harmes, whose kick slewed off his boot and skidded toward the boundary line deep in the Blues’ right forward pocket. Recovering quickly, Harmes charged after the ball as it rolled toward the line. Meanwhile, on the opposite side of the ground, Sheldon sensed an opportunity and sprinted hard for the goal square. Just as it seemed that the ball would be called out, Harmes dived and swiped at it with his right arm - knocking it across the face of goal to the feet of Sheldon in the square. Ken gleefully popped it through for his third goal of the day, and the Blue Boys were home!

In spite of that triumph, ructions at board level began to split in 1980 and the team was all but humiliated by successive finals losses. Sheldon still had a solid season, finishing among the top 10 Best and Fairest, and representing Victoria at elite level for the first time. Then in 1981, David Parkin’s arrival as coach brought cohesion back to a talented list, and the Blues finished top of the ladder before again meeting Collingwood in the Grand Final. Parkin ran Sheldon and Rod Ashman on the ball together for most of that match, and the tactic worked brilliantly. Ashman kicked three goals and Sheldon two, as the Blues claimed victory by 20 points. Sheldon's second goal – the first of the last quarter - was a lovely left-foot snap from a stoppage at the city end of the MCG to put the Blues in front, and from then on they were never seriously challenged. 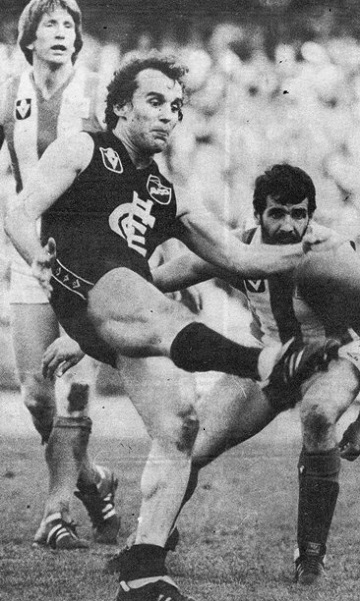 Continuing his quite remarkable run of success, “Bomba” collected his third Premiership medallion in four years on Grand Final day 1982. Carlton’s opponent this time was Richmond, who started hot favourites after decisively beating the Blues in the second Semi Final. But in the flag decider, Parkin’s men met every challenge thrown down by the Tigers. Led by captain Mike Fitzpatrick and Warren 'Wow' Jones in the ruck, and with Wayne Johnston dominant in the centre, the confident Blues controlled the match all day and won by 18 points. Sheldon played as a ruck-rover and gathered 20 quality possessions as Carlton overcame their bogey team to collect a well-deserved 14th Premiership Cup.

‘Bomba” continued his good form into 1983 as a member of Carlton's first-ever Night Series Premiership team, when an under-manned Carlton defeated a near full-strength Richmond side by 6 goals on a cold July evening at VFL Park. After representing Victoria for a second time, Ken again finished in the top 10 in Carlton’s Best and Fairest, soon after the Blues lost to Essendon in a disappointingly one-sided Elimination Final.

By 1984, Sheldon had played 114 games in a relatively injury-free career. However, before that season had even begun, a couple of serious hamstring and calf strains stopped him in his tracks. He made it back on to the field in time for the finals, but lacked match fitness as the Blues went out in straight sets losses to Hawthorn and Collingwood. Thereafter, right through until his final game for the Blues, Kenny was a worthy senior player, and a popular clubman who was always happy to guide and advise the less-experienced members of the squad. His last appearance in the famous Navy Blue guernsey came when he skippered Carlton’s Reserves to a huge win over Footscray in the 1986 Reserves Grand Final, leaving “Bomba” to sign off from Princes Park with yet another flag.

In 1987, Sheldon was cleared to St Kilda, where he soon became a leader. Often playing in defence, Ken added a further 53 games and 24 goals to his career tally, before eventually hanging up his boots in 1989. The following year, he was appointed senior coach of the Saints, and took the perennial wooden spooners to successive finals appearances in 1991 and 1992. In September 1993 he was controversially sacked at a time when only the legendary Allan Jeans had a better ratio of wins from games played. Other offers weren’t slow in coming however, and in 1994, Sheldon took over the reins as senior coach at SANFL team South Adelaide.

In 2001, Ken returned to his home state and coached the Echuca Bombers to a hard-fought Goulburn Valley League Premiership. The following year he moved on to VFL heavyweights Springvale, before being lured back to St Kilda to take on the role of Football Operations Manager for the Saints.

Season 2006 saw the Sheldon name linked to Princes Park again when Ken’s son, Sam - a promising mid-fielder with the Oakleigh Chargers - was offered a place on Carlton’s 2008 rookie list as a father/son selection in the National Draft. The Blues wanted Sam to delay his draft nomination for twelve months, but he elected not to wait an extra year, and was snapped up by the Brisbane Lions at selection 70.

A few days later, Ken Sheldon was inducted into the Carlton Hall of Fame.

Bendigo All Stars Team (1972-1997).
In 1997 the Bendigo FL compiled their best team for players originating from the BFL VCFL zones for the period from 1972 - 1997, Sheldon was named in the forward pocket in that team, he was also named as the Coach of the team.

As well as numbers 5 and 37, Ken wore guernsey number 51 whilst playing with Carlton's Reserves in 1976.

After joining Brisbane, Sam Sheldon made his senior debut in 2009, and went on to play 43 games for the Lions over four seasons.

While her younger brother Sam was playing football, Ken's daughter Lauren decided to pursue her interest in women’s boxing. She had her first bout in December 2010 and scored a unanimous points victory, later saying, “It was an awesome experience, and an adrenalin rush.”