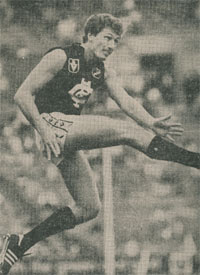 
Throughout the euphoria of Carlton’s glorious 1979-81-82 run of Premierships, the club remained active in the search for new talent, particularly interstate. One name that was mentioned often in that time was Warren Ralph, a crack full-forward from Claremont in Western Australia.

Standing 190 cm and weighing in at 90 kg, Ralph was a quick-leading, safe-marking type with sensational goal sense. He was the WAFL’s top scorer three seasons in a row from 1981 to ’83, with tallies of 127, 115 and 128 goals. Over the same period he also represented WA six times in interstate matches, and averaged better than three goals a game. When he finally agreed to join the Blues for season 1984, he was an experienced 25 year-old with almost 100 senior games to his credit. Carlton was confident that at last we had another well-honed spearhead for our goal square, and gave Ralph the traditional full-forward’s guernsey number 22.

Ralph began his career at Princes Park in spectacular fashion, booting 9 goals on debut against North Melbourne, and six the following week against Fitzroy. But from then on, his game tailed off as opposing coaches worked him out. He was dropped from the senior side late in the season and his future seemed in doubt, until a rash of injuries to key players brought about his recall for the ’84 Qualifying Final against Hawthorn.

Ralph was a star that afternoon, in a ferocious contest between two grimly-committed teams. He had kicked all of Carlton’s five goals to half-time, and ended the match with eight, to set a new Qualifying Final record as the gallant Blues’ flag campaign ended in a 30-point defeat. Still, Ralph finished the year with 55 majors to win the club’s goal kicking award, and his impressive finish to his debut year encouraged every Carlton supporter.

However, a knee injury disrupted the early part of his second year, and after that, his confidence deserted him. Unable to string together consistent performances, Ralph became somewhat disillusioned with AFL football and was delisted after the 1986 season - although not before bowing out on a high note by playing in Carlton Reserves' victory over Footscray at the MCG on Grand Final day, in front of an enormous crowd that eventually exceeded 100,000. By then, Ralph had played 21 senior matches for the Blues, for a respectable return of 72 goals.

After departing Princes Park, Ralph returned to Claremont where he soon found form again for the Tigers. In his last two seasons back home in 1987 and 1988, he notched a total of 150 goals (75 in each). During 1988 he transferred to Glenelg in South Australia (30 goals from 14 games), and while playing for the Bays, had the enormous good fortune of winning the national weekly numbers game Lotto - a stroke of good fortune that saw him collect $882,849. The money win wasn't enough to keep him in SA as he moved back to Claremont in the later part of the 1989 season, just in time to help them to another premiership.

Warren Ralph's original junior club was Floreat Juniors before he joined the colts at Claremont.

1981 - Lou Richards after losing a bet thanks to Bortolotto.