Derrick Filo played in Carlton thirds and junior development squads, he was outstanding junior from Castlemaine FC that was affiliated within Carlton's Bendigo recruiting zone. Derrick Filo was a member of the Blues Development in 1984 and 1985 where he was part of the Bert Deacon squad. In 1986 he was one of the 45 players to play in the U/19's that season and it was noted in the club publication Blues News that he had showed promise when representing Carlton that season.

Filo was more interested with playing country footy as that's where his heart laid. Filo would become one of the most decorated players in the Bendigo FL, who knows what may have become if he had wanted to play at the highest level.

In 1986 Derrick Filo was voted as the Bendigo FL Rookie of the Year whilst playing for Castlemaine.

He would not play a senior game with Carlton.


Derrick Filo reaches 400 senior games: in mid-winter, 2007
One of the BFNL's enduring figures in Derrick Filo reached the magical 400-game milestone in mid-winter six years ago. Yes, it was back in 2007 that Dekka chalked up the staggering mark. In my 30-odd years of covering Bendigo footy I can recall only Golden Square's marvellous goalkicking winger Peter Moroni and Kangaroo Flat's incredibly durable Ronnie Wicks achieving the same feat. But their achievements take in games played in the Twos. Filo's 400 were all senior fixtures. Indeed, he's the only player in the storied history of the BFNL to have achieved this memorable feat.

Filo had played 170 games at Castlemaine from 1984 to 1994 (including the 1992 premiership as Magpie skipper), 95 games as coach of the Kyneton Tigers (which took in the '95 and '97 flags and runner-up spot in 1996) and 55 matches at the helm of Kangaroo Flat (2000-2002, including the Roos' grand final appearance in 2000 and third placing in 2001). By round 6 in 2007 he had made 80 appearances with Eaglehawk and was to go on and lead them to BFNL senior premierships that season and again in 2008. So adding those 170, 95, 55 and 80 appearances together by June, 2007, and Dekka notched the astounding 400-game milestone. And that's not counting the 30 games he's appeared in, wearing Bendigo's blue and gold representative colours. Best player afield for Bendigo in inter-league footy these days takes home the Derrick Filo Medal. During his long run with the Bendigo side Dekka captained the Blue and Golds to victory in the 2002 VCFL country championships Div. 2 title.

Filo had been presented with BFNL life membership on Michelsen Medal day four seasons earlier, in 2003, before his 400th game milestone. Of course, he'd won the medal in 1991 with 21 votes during his Castlemaine days. FILO was aged 38 six years back when he reached his milestone match. And he made it a memorable one as Eaglehawk trounced Sandhurst on the QEO: 19.23 (127) to the Hurst's 6.12 (48). Filo booted five goals himself and his then 17-year-old son Brodie added four. It was the same weekend, incidentally, as the McConnell brothers' tribute function at the White Hills footy club. David McConnell was to play his 200th on Saturday, June 16th in 2007 while brother Brad was listed to play his 200th at North Bendigo on July 28th.

Dekka started his senior journey way back in May, 1984 with Castlemaine as the Magpies took on Golden Square at the Camp Reserve. Filo was a late inclusion that day as coach Bob Gartside invoked his youth policy. Filo had been starring in the Maine under-18s and Gartside gave him his chance. He kicked two goals in his senior debut, but Square won: 15.21 (111) to 10.11 (71). Some of his teammates that day were present day BFNL board representative Ron Cawthan, half-forward Brett Struhs, former senior coach Lennie Watson, Leigh Trethowan, Peter Strange, Mark Tatt and Tony Strong. Filo was in and out of the Castlemaine seniors for the rest of the '84 season before cementing his spot in the seniors in 1985. Filo did have a few runs with the Carlton under-19s through the then VFL zoning system. He'd only play with the Blues when Castlemaine wasn't drawn to play a match as his interest remained focused on the country.

By the time his career with the Maine was completed (1984-1994) Dekka had won four club best and fairests (1988, 1990, 1991, 1993), the '91 Michelsen medal and he'd captained the Pies to the 1992 BFL premiership. He left midway through 1994 to play with Balranald, coached by an old mate in Simon Jorgensen. Balranald won the '94 Central Murray Football League flag. Filo says in the end Balranald was just a long, long distance from home. "It was a four-hour drive which was just too far away from my family," he recalled.

THEN it was on to Kyneton, where president Shane Feely appointed Filo as Tigers' senior coach. Andrew Mapleson had guided Kyneton to the 1994 preliminary final and Feely was convinced Dekka could take the Tigers even higher. He was right. Kyneton won the '95 flag beating South Bendigo by 45 points. It was the Tigers' first senior BFL grand final since they'd lost to Square in 1976, but this time it was a winning grannie. The following season Kyneton went down to Kangaroo Flat in the Big Dance by six points. It was one of the great grand finals in BFL history. Then in 1997 up bobbed Kyneton again. The Filo-led Tigers belted Golden Square by 67 points and by the time he left after the 1999 season Kyneton had made the finals each year and had won 64 of 95 matches. Feely credits Filo with bringing out the best in young players such as Daniel Schmidt and Simon Elsum, who later won the 2004 Michelsen Medal when he was playing with Gisborne.

In 2000 Filo was appointed by Kangaroo Flat president Peter Cole and his committee as Roos' coach. Dekka said he'd wanted to move to Bendigo and the appeal of the Flat job was one he couldn't turn down. He took the Roos to the 2000 grand final against his old side Castlemaine, but appalling inaccuracy cost the Green and Whites. Registering three more scoring shots, they booted 9.17 (71) to the Magpies 12.11 (83). Despite holding Steven Oliver goal-less the Roos blew their chances with a wasteful third quarter in which they could land just a solitary major, along with a string of behinds.

He took over as Eaglehawk senior coach in 2003 but the Two Blues just weren't able to get over Gisborne in Filo's early years at Canterbury Park. They lost the 2003 grand final 18.12 to 11.7 and then two years later went down in the 2005 Big Dance: 14.17 to 10.10. But that was put to rights although Filo wasn't to know three months out from the grannie when he played his 400th when Eaglehawk won the 2007 flag in a thriller: 12.12 (84) to Gisborne's 12.10 (82). The Hawks backed up the following September by downing Golden Square in another heart-stopper: 14.11 (95) to the Dogs' 12.17 (89). AS the summer of 2012-2013 drew to a close and as the outgoing coach Filo had a bit to say about the demise of Kyneton's senior side. He strongly believed that the Tigers' club culture needed to change. "I'm disappointed that it has come to this (not fielding a senior BFNL senior team for 2013), but the reality is the problems stem from the culture of the club," he said at the start of February this year. "I've heard talk of going to the Riddell league, but if the club can get the culture right I've got no doubt it can be competitive in the BFL. "They've got six or seven months to get things right looking ahead to next season." And of course since Dekka made his views known, the Tigers have installed media personality Rob Waters as president and the announcement of the 2014 coach is imminent.

SOME of Dekka's memories over his celebrated journey.
Best player: "Steven Oliver. He was just on a different level to everyone else."
Best team: "Northern United of the mid-1980s. What they would do to today's teams is just ridiculous."Just look at their-goal-to-goal line. Garry Mountjoy is probably the best centreman of the past 20 years. Gavin Exell is probably the best centre half-forward and Ron Best at full-forward is the best ever.
"Then they had Bluey Southcombe in the ruck and blokes such as Russell Muir, who had played league footy, in the back pocket."
No. 1 highlight: "The 1995 premiership with Kyneton. It was their first flag in the BFL for 29 years, but in my first year of coaching I had four blokes who had played 200 games. They were great support."
Biggest changes in Bendigo footy, 1984-2007: "The depth isn't as strong as it was and there are a number of factors. "The Pioneers is a great system but they take the best kids. So you don't see a Greg Williams or a Tony Southcombe or a Ron Best coming through. "The thing which is a real concern is we lose a lot of players to other leagues because clubs are not as financial. In 1984 when I started it wasn't uncommon to have half-a-dozen guys at a club who had played 150 to 200 games. "You just don't get that any more. And overall the game has changed. There's a lot, lot more running these days. 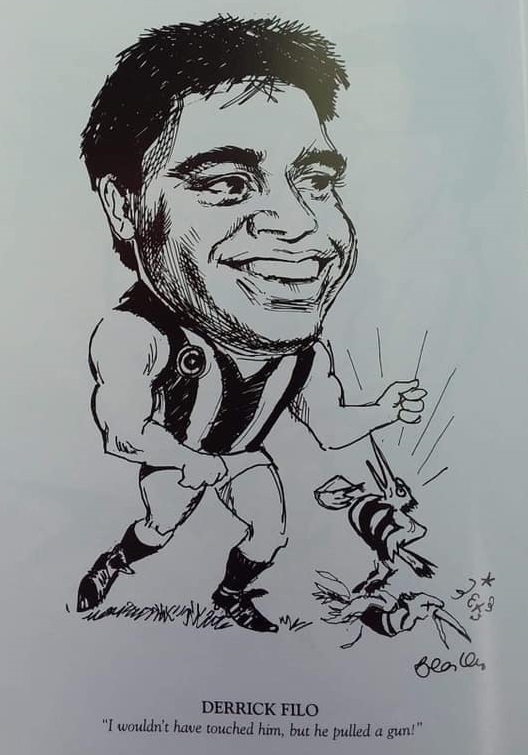 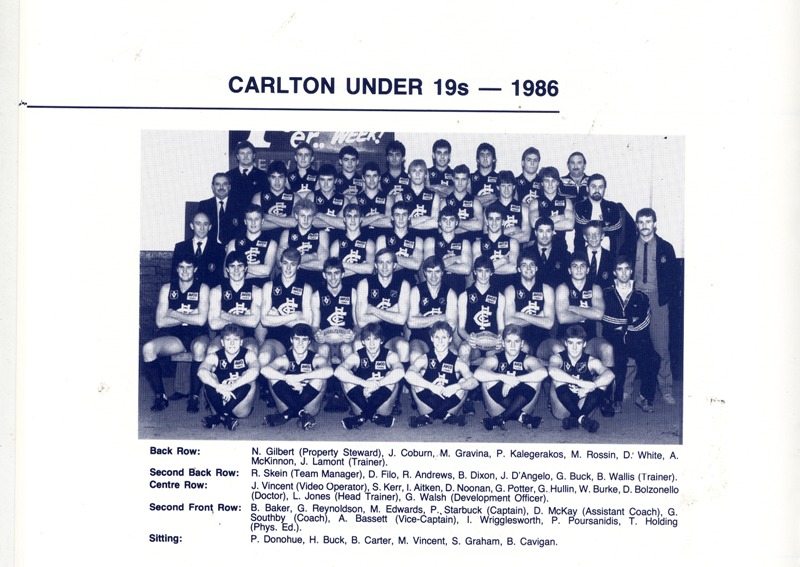 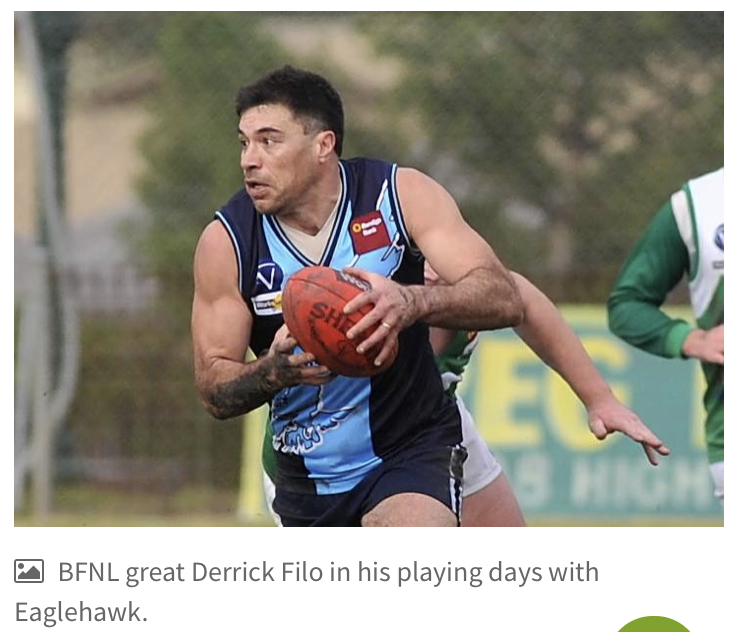 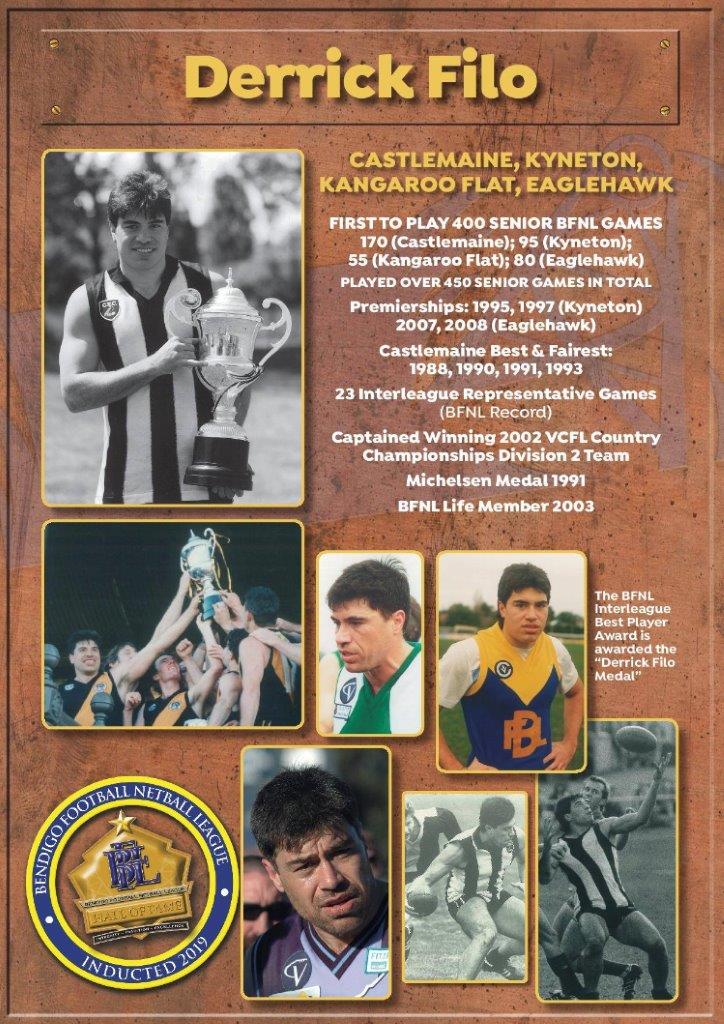 1981 - Lou Richards after losing a bet thanks to Bortolotto.