The Next Big Thing.. 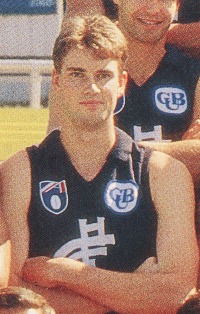 An enigmatic figure in the history of the Carlton Football Club, Steven Wayne Oliver was just 16 years old when he was drafted by the Blues from the Castlemaine Magpies in 1987. Tall, with a huge leap and a powerful left foot, he was a prolific goal-kicker at junior level, and during his six seasons at Princes Park more than one good judge saw him as a potential champion. But he never settled in Melbourne, and after 13 reluctant games for the Navy Blues, he went home for good in 1994 to become a legend of the Bendigo Football League.

As a teenager, Oliver was a brilliant all-round sportsman. Apart from his appetite for kicking goals on the football field, he played golf with a single-figure handicap, and captained Victoria at the 1987/88 National Under-17 Cricket Championships. When he was selected by Carlton at number 26 in the 1987 National Draft, he had already told the club that he would not relocate to Melbourne to live. Instead he would stay at home in Bendigo, and commute the 80 kilometres each way several times a week for training and games.

That arrangement continued throughout Oliver’s career, as he graduated up through the ranks from Under-19 to Senior football. Carlton’s match committee was patient, until eventually, the decision was made to test him at the highest level before deciding whether or not to persist with him. So when the Carlton side ran out on to the ground at Carrara Stadium in March 1992 to play the Brisbane Bears in the opening round of that AFL season, guernsey number 3 was worn by 21 year-old Steven Oliver on debut. History records that the Blues cruised to a four-goal victory, with skipper Stephen Kernahan bagging 5 goals. Next to “Sticks” in the forward pocket, Oliver was hardly sighted and did not trouble the scorers.

The following week, Carlton hosted reigning premiers Hawthorn at Princes Park, and pulled off a major upset. Before the game, Oliver was relegated to the interchange bench, as Blues coach David Parkin made a match-winning move, sending champion full-back Stephen Silvagni to full-forward. Silvagni was unstoppable, and kicked 8 goals - but as a result Oliver warmed the pine for the entire match. Furious, he confronted club officials afterwards to tell them he was finished, then headed back to Castlemaine.

The Magpies welcomed him home, and Oliver almost single-handedly won the 1992 BFL Premiership for the club by kicking a mammoth 136 goals over the season at full-forward, he was coached by former Blues thirds and reserves player Matthew Scully when they took out the 1992 flag. That prompted ABC commentator Tim Lane to dub him “The Bush Coleman,” while others described him as “The Next Big Thing,” and there was a rethink at Carlton. Still under contract to the Blues, Oliver was recalled and convinced to take one more shot at the big time.

When Carlton travelled to Perth to play the West Coast Eagles in round 14, 1993 Oliver was about to play just his fifth AFL match. An injury early in the game to 'Sticks' Kernahan provided the tyro with an opportunity to strut his stuff out of the goal-square, and suddenly, everyone saw what the hype was all about. Steve’s opponent that afternoon was Eagle Glen Jakovich, who was on his way to immortality at West Coast as a two-time Premiership player and dual All Australian. On this occasion however, Oliver took Jakovich apart, taking nine marks – including two out and out “screamers,” kicking two goals and assisting in two more.

The following week against Brisbane, another eye-catching effort produced 7 marks, 15 disposals and two goals, then Steve’s form fell away and he wasn’t considered for Carlton’s finals campaign. The Blues suffered a shock loss to Essendon in the Grand Final, and Oliver survived the subsequent player cull – but a serious shoulder injury early in 1994 cost him 9 weeks on the sidelines and his five late-season games were unremarkable. Eventually, Carlton let him go at the end of that year, although a place on the list was kept open for another season, just in case he changed his mind.

Settled back in Bendigo, Oliver resumed his position as Castlemaine’s spearhead, and proceeded to terrorise opposition defenders for more than a decade. He was the leading goal-kicker in the BFL again in 1996 (84 goals) 2000 (132) and 2005 (77) and his huge bag in 2000 was doubly-sweet because the Magpies were premiers again, under the coaching of another former Blue; Shane Robertson.

Eleven years after his last appearance for Carlton, Oliver made the news once more when he played his 200th game for Castlemaine on May 7, 2005. He was 34 years old by then, had won three club Best and Fairest awards, and had taken his career tally of goals for the Magpies to 955, at the very healthy average of 4.7 per game. When representative and inter-league games were added, his career total became 1021. In 2009, during celebrations marking Castlemaine’s 150th year of competition, Oliver was officially declared one of the Magpies’ 25 Greatest Players.

Later, after his retirement from the field, Oliver was appointed CEO of the Bendigo Football Netball League, and served in that capacity from 2008 to 2013. In 2010 he entered politics, and stood as the National Party candidate for the seat of Bendigo West in the Victorian State Election. However, he wasn’t able to unseat the incumbent Labor member.

Glen Jakovich article on the day Steven Oliver towelled him up.
https://thewest.com.au/sport/afl/west-coast-legend-glen-jakovich-recalls-the-day-carlton-rookie-steven-oliver-starred-ng-b881450037z?fbclid=IwAR3b56l5jOOi662oU1za3DcG6HBoep2myzEKt_Bc9VeTnMx3Gov47PNKz9Y