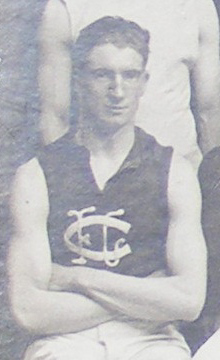 Frank Murphy is listed as playing a single game for Carlton in Season 1921. He was recruited from Carlton District. Murphy played with Hawthorn from 1926 to 1928 where he played 28 games and kicked 20 goals for the Hawks.

It was reported July 1 1922, that the Williamstown club were waiting on a clearance for Murphy (Carlton).

The Tasmanian newspaper the Advocate (Burnie) August 13 1934 reported that Frank Murphy "formerly a prominent member of the Carlton (Victorian League) football team," was in the island state and viewed the Burnie-Ulverstone game. It said "Mr. Murphy also played with Collingwood, and later with Hawthorn, remaining in the latter team until three months ago."