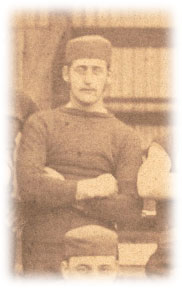 
P. Hughes was a member of the Carlton Football Club touring side to Adelaide in 1881.
(The Carlton Story, H.Buggy and H.Bell, p50)


P. Hughes (above) is pictured in the Carlton team that visited Adelaide in 1881.

1889 August 17
P. Hughes played for the Blues in an ex players match against former Pivotonians at Geelong to raise funds for the local hospital.