Carlton grinds out a tough win over Sydney at Optus Oval. 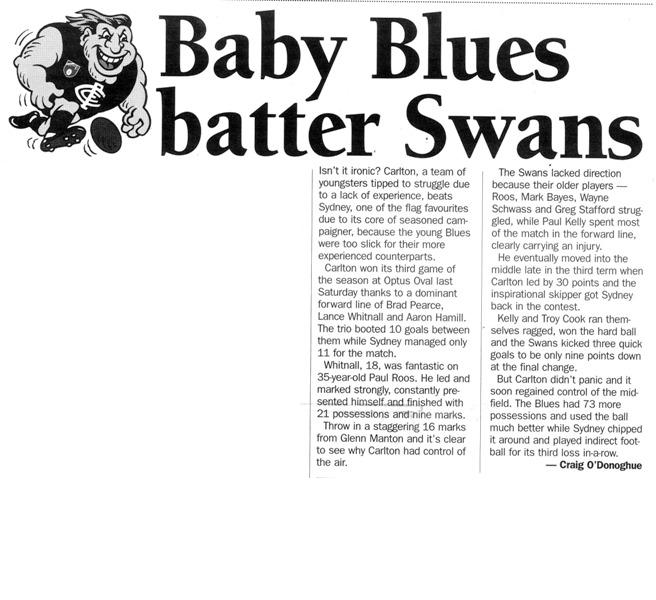 Sydney kicked the first 2 goals of the game but the Blues then did all the attacking and should have been a lot further ahead at half time than 11 points, had they converted more of their scoring opportunities. Sydney kicked the first goal after half time to reduce the margin to a goal but then Carlton kicked 4 unanswered goals to take a 5 goal lead. But Sydney kicked the final 3 goals of the quarter to make it even and maintain the same 11 point deficit at 3/4 time. Both sides each kicked a goal at the start of the last quarter before the Blues took control, kicking 3 goals to 1, to run out 26 point winners- just its third win of the year.

Scott Camporeale had 30 possessions, Brett Ratten 27 and Fraser Brown 25. Aaron Hamill had 27 and kicked 4 goals from strong marks. Glenn Manton had 25 possessions and took 16 saving marks in defence. Matthew Allan dominated the rucks with 34 hitouts. Brad Pearce kicked his third 5-goal bag in 4 matches. Lance Whitnall and Dean Rice were also good up forward, each with 21 possessions and a goal.