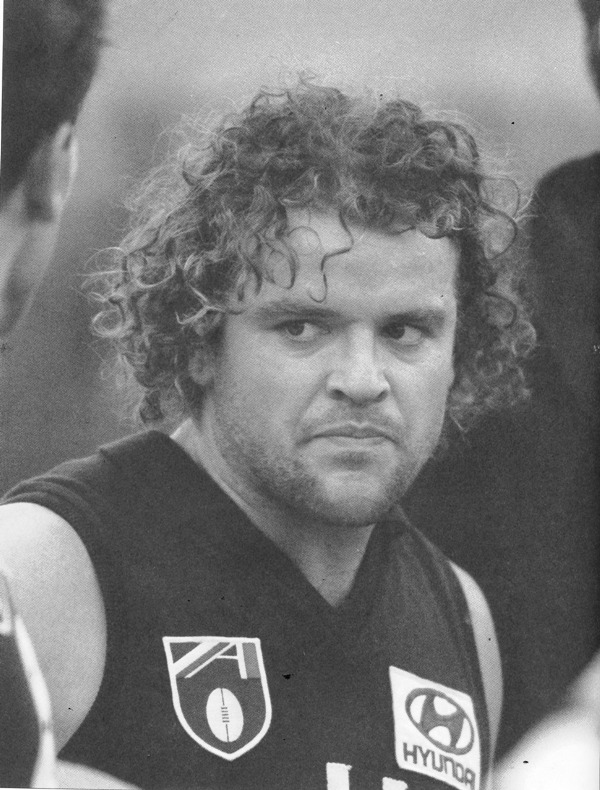 Fraser Brown was not just a club favourite as a Premiership player, Best and Fairest and hard-at-it midfielder – he became part of footy folklore when his game-saving tackle on despised Bomber Dean Wallis in the dying seconds of the 1999 Preliminary Final earned the Blues a famous victory. In one of the most celebrated moments in Carlton’s history, Brown wrapped up Wallis in a brilliant tackle as the Essendon big man tried to baulk around him, and kick for goal. The ball spilled into space, the Blues defence swooped to clear it, and seconds later the final siren blared with Carlton in front by one point. Although the battle-weary Blues fell to North Melbourne a week later in the Grand Final, Carlton’s disappointment was tempered by the lingering joy of having upset a cocky Essendon team that was poised for a Premiership, and the thrill of that victory is still fondly remembered by the host of Bluebaggers on hand to experience it.

Hailing from Lilydale, Brown was the product of a strong sporting pedigree. His mother, Joyce Brown, was one of our nation’s greatest female athletes, having captained the Australian Women’s Netball Team to the World Championship in 1975 before taking on the role of national coach and winning two more World titles in 1983 and 1991. Joyce’s father (and Fraser’s grandfather, Doug Anderson) played 8 games of League football for Fitzroy in 1925-26, and it was largely through his influence that Fraser benefitted from a thorough grounding in the basics of the game.

In 1987, Brown was a member of the all-conquering Victorian team that won the National Under-18 Championship. At the same time, was already a regular with Carlton’s Under-19 squad. Midway through the year, he was promoted to the Blues’ powerful reserves team, and soon impressed in a variety of roles across the centre and wing. Tenacious, an excellent mark and an accurate kick with either foot, he wore guernsey number 53 when Carlton beat St Kilda to claim the Blues’ seventh reserves premiership in front of 97,000 at the MCG on Grand Final day. Prominent throughout the match, Fraser chalked up his first flag in navy blue just six weeks after his 17th birthday.

In 1989, after a patient apprenticeship, the club promoted Brown to the senior list and offered him guernsey number 20. He didn’t hesitate to accept it, and was still only 18 when he was selected for his first senior match against Footscray at Princes Park in the first round of the new season. It proved to be a less than memorable start, because Carlton was hammered by ten goals, and Brown was involved in a report when an opponent deliberately tripped him. Four weeks later he kicked his first career goal against Hawthorn in round 5 at Waverley, before going on to play a modest 21 games in his first three seasons.

By then, the shaggy-haired Brown had earned the nickname “Dog” from his team-mates - because his surname invited the extension “brown dog,” and because he was “meaner than a junkyard dog” in his attack on the football. As his career unfolded Fraser worked incessantly in the gym, and developed into a solid inside midfielder, and by 'solid,' we mean 'brick solid,’ because he eventually sported a powerful 90 kilo, 181 cm frame that was more than handy in the clinches.

1992 was Brown’s breakout season, when he claimed a regular berth in Carlton’s midfield, and began a decade when he became an ideal foil for the prolific ball-winning ability of club legends Greg Williams, Brett Ratten and Craig Bradley. ‘Dog’ was never the quickest player in the game, but he was a creative user of the football, tireless, fearless and focused. Time after time he inspired his team-mates with selfless play, and was always among the first in when skirmishes erupted. Of course this brought him to the notice of umpires, and he was a regular visitor to the tribunal throughout his career.

‘Dog’ played his 50th senior match in 1993 as Carlton staged a resurgence to qualify for the finals at last after a five-season drought. A thrilling 2-point Qualifying Final victory over Richmond in the first-ever AFL final played under lights was followed by a grafting win over Adelaide in a Semi Final at Waverley on the following Saturday afternoon. Those wins put the Blues through to yet another Grand Final against Essendon, and Brown into his first flag decider at senior level.

Unfortunately for Fraser and his team – who started the match as slight favourites in light of Essendon’s relative youth and inexperience – the ’93 Grand Final was one of the blackest days in Carlton’s history. The so-called Baby Bombers were too quick and too committed for a sluggish Blues outfit, and won the Premiership by an emphatic 44 points. Brown had a dirty day and didn’t see out the match after straining a knee ligament, and one can’t help but ponder whether the events of that day spurred him to greater heights (particularly in finals, and particularly against the Bombers) from that day on. 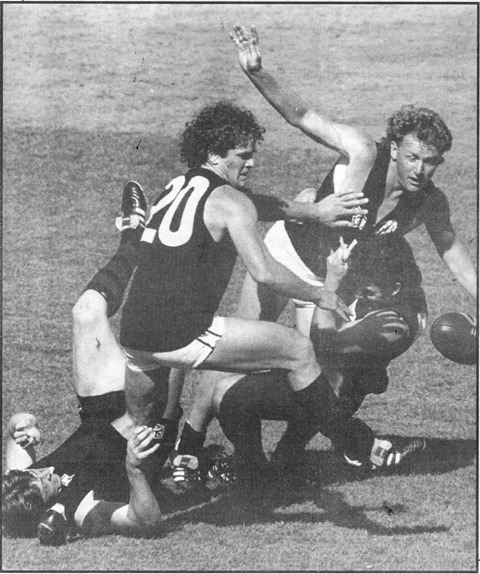 Carlton reacted swiftly to that disaster, and in 1994 blooded a string of fresh faces including Matthew Allan, Troy Bond, Barry Mitchell, Brad Pearce, Dean Rice and Adrian Whitehead. Fraser had another consistent season, highlighted by his cameo role as a forward against Richmond in round 23 at Princes Park. With Carlton’s midfield completely dominant that afternoon, coach David Parkin indulged himself with the luxury of leaving Brown in attack throughout the game, and ‘Dog’ responded by kicking seven goals straight as the Blues smashed the Tigers by 113 points.

Having finished second on the ladder under a new final 8 system, Carlton seemed well-placed when September rolled around – but the team didn’t measure up when it counted most, and were bundled out of contention after successive defeats by Melbourne and Geelong. Afterwards, amid heavy criticism of a list accused of being too old and too slow, Parkin stood fast and refused calls for a clean-out. Within 12 months, his faith in his playing group would be justified completely.

Carlton’s sensational 1995 – when the Blues swept all before them to claim the club’s 16th Premiership – has been well-documented, as has Brown’s last ditch (and ultimately successful) bid to recover from an ankle injury and take his place in the team that demolished Geelong in the Grand Final. Having contributed strongly in Carlton’s Qualifying Final win over Brisbane, ‘Dog’ was devastated when he wrenched his left ankle in the first quarter of the following week’s Preliminary Final win over North Melbourne. He hobbled from the field in distress, and even though Carlton dominated the match to win by ten goals, it seemed for a number of days afterward that the Blueboys would be facing the Cats without him.

Throughout the week before the Grand Final, Brown spent hours each day in a hyperbaric chamber to speed the healing process, and it wasn’t until late on the evening before the match, when – with his ankle heavily strapped – he was able to convince coach Parkin that he was fit enough to play his part in Carlton’s triumph by 61 points over the Cats.

There is ample evidence that ‘Dog’ was an even more valuable player for Carlton after 1995 than before it – apart from 1997, when persistent hamstring problems restricted him to just seven matches for the season. His two most prolific career games - 42 disposals in round 20, 1998 against St Kilda, and 37 disposals in round 21, 1999 (also against the Saints), came either side of the other crowning achievement in his career – the 1998 Robert Reynolds Trophy as Carlton’s Best and Fairest.

In round 3, 1999, Brown played his 150th senior game when Carlton survived a last quarter onslaught by the Western Bulldogs to win by 2 points. It was a hard and willing contest, and a number of players from both sides were reported, including ‘Dog’ who was given a 2-week holiday by the tribunal as a memento. Later in the year, Carlton wound up sixth on the ladder (six wins behind Essendon) to set the stage for Brown’s exploits already described. Following that, the third Grand Final appearance of his career resulted a second defeat, but he still had one more shot left in his locker.

In season 2000, Essendon swept all before them to finish five wins clear on top of the ladder. Carlton wound up second, although by finals time the Blues were struggling and there was a gulf between the two sides form-wise. Once again beset by ankle and hamstring problems, as well as another suspension, Brown had played just eight matches during the home and away rounds. But his experience was vital, so he was included as an interchange player in Carlton’s team that was a shock loser to Melbourne in a Qualifying Final.

Injuries to key players including Anthony Koutoufides and Craig Bradley hadn’t helped Carlton’s cause against the Demons, and even when the Blues struck back by crushing Brisbane in a one-sided Semi Final, champion full-back Stephen Silvagni was another casualty. Therefore, Parkin’s boys were given little or no chance of beating the Bombers in the Preliminary Final, and that was one prediction that the pundits got right. Hell-bent on retribution for the previous year’s humiliation, the Bombers took control early and never relaxed their grip. Early in the third quarter, Carlton trailed by almost five goals before Brown was called into the fray for the first time, and his four disposals in two minutes led to a mark inside 50 metres by Darren Hulme, whose set shot just missed. Carlton rallied to outscore the Bombers by six goals to four in the last quarter, but the result was never really in doubt and Essendon marched on to win the Millennium Flag.

Fraser Brown retired after that game, with 177 games and 99 goals to his credit, and his name emblazoned alongside those of Alex Duncan, Wes Lofts and Geoff Southby on Carlton’s number 20 locker. After football, he embarked on a successful career in property development, while he continued to support his beloved Blues out of the spotlight. In 2006, his induction into the Carlton Hall of Fame was widely, and genuinely acclaimed.

More on Brown's exploits in the 1999 Preliminary Final are explored in this exclusive Blueseum article 'Bomber Blues'.