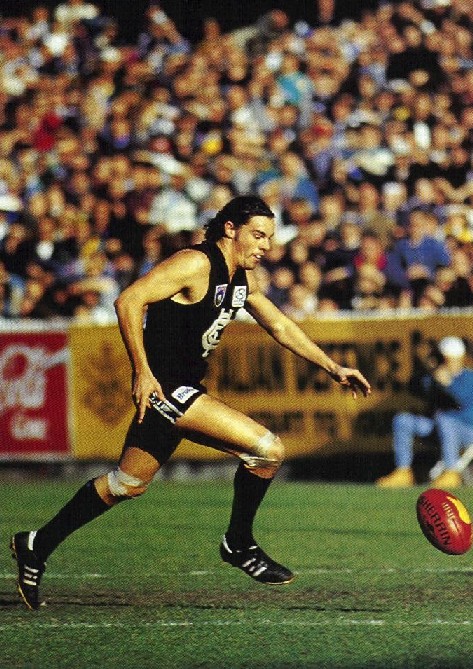 Recruiting cast-off players from other clubs is always a gamble. Often they just drift off into the history of the game, although others can sometimes blossom into stars who make an indelible mark on a team. Brad Pearce, an ex-Brisbane Bear who had been discarded after one injury-riddled season up north, came to Carlton in 1994 and played a significant role in the Blues’ Premiership win the following year. A smart, fast-leading third forward with a deadly left foot, Pearce found his football destiny in and around the shadow of Blues power forwards Stephen Kernahan and Earl Spalding.

Brad grew up in Springvale, Victoria, and was promising enough to be put through St Kilda's system as a teenager. But by his own admission he lacked the dedication required to reach elite level at that stage of his life, so when the Saints let him go, he crossed Bass Strait and joined South Launceston. More than one AFL scout respected his ability however, and in 1993 Brisbane invited him north to coincide with the club’s move to a new home at the Gabba in Brisbane.

Back in those times, being drafted by the lowly Bears didn’t always bring excitement. In fact, some of the more promising players Brisbane had previously tried to recruit just refused to turn up, including three South Australians who later starred in Premierships for the Adelaide Crows; Andrew and Darren Jarman, and Chris McDermott. Still, Pearce accepted his second opportunity to play League football and, after recovering from a worrying hamstring strain, wore the Bears’ redesigned guernsey in two senior matches late in the year. Both games ended in losses - to West Coast and Fitzroy respectively. He didn’t do much in either (apart from kicking his first career goal on debut) and in September looked like he was on the scrapheap for good, when the club told him his services were no longer required.

But by coincidence, Brisbane’s Recruiting Manager Shane O’Sullivan also left the Bears to return to Carlton at the same time, and he was convinced that Brad had untapped potential. So, largely because of O’Sullivan’s input, Pearce was picked up by the Blues with selection 32 of the 1994 Pre-Season Draft, and given the honour of wearing guernsey number 19.

However, Carlton coach David Parkin was not impressed by Pearce’s fitness levels at the commencement of pre-season training, and came down hard on the 22 year-old. Brad wasn’t considered ready for senior football until early June, and his first two games in Navy Blue (off the interchange bench in rounds 11 and 12) were unremarkable. On the other hand, his second half of the season with Carlton Reserves was quite significant. In games where Steven Oliver was at full-forward to draw the key defenders, Pearce’s clever leading cracked open defences, and his agility at ground level made him a constant threat.

To his credit, Pearce responded to Parkin and Sullivan’s stern advice to put his head down and his butt up, and after a full pre-season, really came alive in 1995. Starting in a forward pocket in Carlton’s victorious opening game of the season against Collingwood, he played 22 of a possible 25 matches in a stellar season for the Navy Blues. Benefitting from accurate delivery of the ball by an outstanding midfield of Craig Bradley, Greg Williams, Anthony Koutoufides and company, Pearce became a crowd favourite. With his distinctive long hair tied back behind his ears, he took some terrific chest marks, generally kicked straight and became the ideal foil for Spalding and Kernahan.

A 20-possession, three-goal game against the Roos in round 5 showcased the new Brad Pearce, followed by a super-efficient game against Hawthorn in round ten. Brad had only ten kicks that afternoon at Princes Park, but took nine marks and kicked 5.2. Later that year he experienced his first taste of finals football, and did all that could have been asked of him. Four goals in Carlton’s emphatic Grand Final victory over Geelong took his tally to 52.40 for the season. Although his opponent Michael Mansfield (later himself to join Carlton) earned a lot of the ball, Pearce was able to convert from limited possessions, and really damaged the Cats on the day. 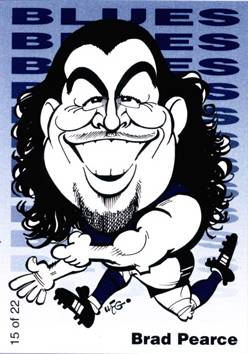 Sadly, that glorious day at the MCG proved to be the last final of Pearce’s career. Over succeeding years he suffered from illness and a string of injuries, including glandular fever, knee, back and hamstring problems. He may never have reached the heights of 1995 again, but he was still very effective whenever he did make it out on to the field, kicking 35 majors in 1996 and 32 in 1998. A six-goal game against the Hawks at Princes Park in round 14, 1998 sticks in the mind, with Pearce kicking three goals in five minutes to spark the Blues to a good win.

Round 21, 1999 was a bittersweet day for the Carlton Football Club after the Blues demolished St Kilda by ten goals in Premiership wingman Scott Camporeale’s 100th game. Two of the club’s most recognisable characters in Brad Pearce and Ron De Iulio both finished up that day, leaving their legacy with their names on locker numbers 19 and 34 respectively.

One of the more eclectic moments in Pearce's career came with a deft little seven or eight-metre, left-foot checkside pass to the running Luke O'Sullivan in a night game. 'Rhino' obliged by kicking the goal, but Pearce's presence of mind before being tackled was indeed memorable.

Brad is also remembered for an infamous skit on The Footy Show, during which he was set up by team-mates. Live to air, Pearce was told by a young female friend that she was pregnant, and that he was the father. A noticeably-shocked Pearce was beside himself, until those responsible came out of hiding, and revealed that it was a prank.

Pearce’s football career did not quite end with his departure from Carlton. In 2000, he headed back to Tasmania to play a season with the Burnie Dockers, under controversial ex-Blue Mick McGuane.