Whilst we all jumped up and down with joy with confirmation of our return to Finals Action with our win over Port Adelaide in Round 20 in 2009, we hope you spared a thought for Blue Bret Thornton. Thornton's brilliant game aside, this win confirmed - fitness pending - that Thornton's record run of games played by a Carlton player without playing in a final, was finally, coming to an end.

After beginning his career in 2002, the year after Carlton last played finals football, Thornton must have been on the top of the world. Successful club – finals action - good debut – Thornton appeared to have it all ahead of him. But then the world crumbled away for both the Carlton Football Club and its players, with the Blues crashing in 2002 and only beginning to resurface in 2008 - 2009. With confirmation of finals football for the Blues, Thornton’s 148 games by the end of the year will be the highest games tally ever played by a Blue before playing in Finals.

The only other Carlton players in our history who didn’t play in a final during their first 100 Carlton games are all 2009 listed players in Stevens, Simpson, Wiggins, Waite and Scotland. (Note Stevens and Scotland both played finals at their previously league clubs). 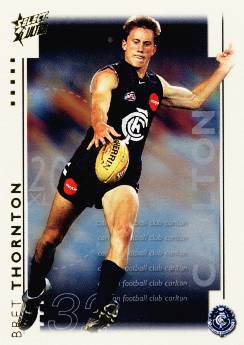 The only 2009 listed players (before the 2009 Elimination Final) to have played in a Final for Carlton, with both having played in 5 Carlton finals are Fevola (during in his first 32 games) and Houlihan (during in his first 36 games). The best by any Carlton player during their first 100 games are Billy Payne and Charlie ‘Spot’ Fisher who both played in 13 finals, while also on 13 finals in all of his 92 games is Gordon Green. Other notable players under 100 games are Jim Flynn (77 games) and Ted Brown (95 games) both with 12 finals, 11 finals for George ‘Mallee’ Johnson and on 10 finals are Doug Gillespie (90 games) and Brent Crosswell (98 games)).

From an AFL perspective, Thornton is not surprisingly a long way off the overall record given the records of success of other Clubs in their history. Three famous cases come to mind here; Robert Flower (Melbourne), Bobby Skilton (South Melbourne) and Trevor Barker (St Kilda).

Flower holds the record of the most games before playing in a final - he played 269 games before playing in his first final in 1987, but his last 3 league games were finals and ended on 272 games in that season’s preliminary final. In another famous case, South Melbourne's Bobby Skilton played his only final in his 218th game and would play another 19 games the next season (1971) and end on 237 games. The history buffs will note that both of their ‘finals’ games occurred when Carlton won the premiership. St Kilda’s Trevor Barker played 230 league games and holds the record of the most games without ever playing in a final, followed by his teammate Geoff Cunningham 224 games.

Thornton's 149 games is thankfully a good 4 full seasons or so away from this record, so whilst we're sure he may have been getting frustrated at not making it, he should be over the moon his time has now come! To top it off, he hits finals football in the best form of his career and at a time when the Blues are rising, promising the chance to lift that overall average.


Blueseum Footnote: Thornton, Simpson, Stevens, Wiggins and Scotland all played their first Carlton final in our 7 point loss to the Brisbane Lions. Waite would have to wait another whole year before making his Finals debut, in game #131!

Articles: Waiting to play in a Flag!!!