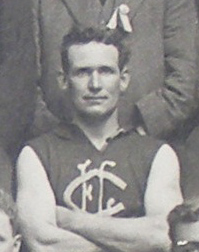 Charles Henry “Spot” Fisher was one of the stars of the VFL during the turbulent years of World War 1. Blessed with a powerful physique, he was renowned for his long, accurate kicking with either foot. Twice a Premiership player, and a reluctant captain of the Blues for just one season, his stellar career at Carlton was all but overshadowed by Australia’s huge sacrifices in the War To End All Wars.

Charlie came to Carlton as international tensions cast a pall over Europe in 1914. A country lad from Kyabram in the Riverina, he played a sensational debut season as a versatile forward for the Blues, kicking 22 goals in his 16 matches. He then capped off a dream start with his new club when he was one of nine first-year players in Carlton’s gritty 1914 Premiership side. Alternating between the half-forward flank and the forward pocket, he was one of five single goal-kickers in the Blues’ fighting six-point Grand Final victory over South Melbourne.

By mid-1915, Charlie’s consistency had already made him a crowd favourite at Princes Park. His clever reading of the play, fine aerial skills and creative use of the ball led to him being described thus by one newspaper of the day; "'one of the few players, it could fairly be said, who cannot be held for an entire match.’''

When he won his first Premiership medal for Carlton in 1914, Fisher wore guernsey number 24. In 1915 he switched to number 15, and won his second flag when Carlton toppled Collingwood by 33 points in front of a relatively meagre crowd of just over 29,000 at the MCG. The Magpies couldn’t cope with Carlton’s slick passing to their big forwards that day, when seven of Carlton’s eleven goals were provided by the foot skills of wingers Jimmy Morris and George Challis, champion centreman Rod McGregor, and Charlie Fisher.

In 1916 Charlie changed his guernsey number again, this time to 7. But it wasn’t to be a lucky switch. The deprivations of the war in Europe hit VFL football, and indeed, the whole country hard. Only four teams competed for the Premiership that year; Fitzroy, Carlton, Collingwood and Richmond. Battling to field a competitive team each week, the Blues were stunned when Charlie wrenched his right knee midway through the season, and for a time it seemed his career was in jeopardy. Happily, he did make it back for the finals, but was never quite the same again, rarely using his right foot for the remainder of his career.

Despite Charlie’s absence for part of the season, the Blues reached their third Grand Final in a row in 1916, only to be outplayed by a committed Fitzroy combination that made the most of Rod McGregor’s absence through injury. In 1917 Carlton finished third in a four-team competition, and third again when eight teams made up the VFL in the last year of the war in 1918.

In 1919 Charlie was honoured with the captaincy of Carlton and took on the responsibility of playing at full-forward. He may have been a yard slower than his absolute best, and only capable of turning one way - but his booming left foot was as reliable as ever and his 36 majors for the season won the club goal-kicking award. The Blues lost the first semi-final to Collingwood, and ended up fourth.

After just that one season as captain, Charlie resigned his position because he believed that the burden of responsibility was affecting his own form. The club reluctantly agreed, and rugged defender Paddy O'Brien took over as the Blues’ on-field leader. Carlton finished third in 1920 after losing the Preliminary Final to Collingwood, but Charlie’s remarkable record of playing finals football in every season of his career at Princes Park remained intact.

Fisher marked season 1921 by adopting guernsey 21, and Carlton were the form side of the league throughout the early part of the year. Then in July, the club was dealt a savage blow when star rover Lyle Downs collapsed at training and died of a heart attack. The shocked Blues united in a pledge to win the flag in Downs’ honour, and were on track when they finished on top of the ladder, before clawing their way through to a Grand Final clash against Richmond.

But the play-off was marred by rain, hail and a strong blustery wind, and Richmond prevailed by just four points in a low-scoring, unrelenting clash between two committed teams. Named in a forward pocket and making regular forays upfield, Fisher was again one of the Blues’ best in what turned out to be his last game for the club.

Afterwards, Charlie retired from VFL football to accept the post of captain-coach at VFA contenders Brunswick in 1922. In his one season at the helm of the Association Magpies, he took his team to an unlucky fifth - missing out on a finals berth by a few percentage points.

"Four hundred miles for a footballer. It reads like a notice outside a picture theatre. That was the distance Mr. J. Clinton travelled last week in order to interview C. Fisher, the crack player from Kyabram (writes the Melbourne Herald).
Having reached the historic village - where the historic Reformers met years ago and shook things up in the political world - he found that Fisher was 40 miles away at a surveyor's camp. Away the Carlton Secretary whirled in a motor car. The speedometer registering 30 miles per hour. "Not fast enough." said Mr. Clinton, and the chauffeur gave the machine its head and hit up a speed that bridged the distance at a much faster rate. He discovered Fisher, had arranged that he should go to "town."
(Observor Adelaide May 16 (p19) 1914)

"C. Fisher, who was born at Cobram, and played with Muckatah in the Goulburn Valley Association for three years, and Kyabram for two more, joined Carlton in 1914, and has been one of the club's leading players ever since. Prior to this year he always played half forward on the right wing, where his swinging left-foot kicks told strongly. For several years none of the back men who had the task of minding him understood his style of play, his turn towards the centre of the ground, which was necessary for the full use of his left foot, always nonplussing them. Fisher, who is splendidly built , and of great strength and solidity, has a fair turn of speed, is a capital marksman, is extremely hard to stop, and is a lovely kick. This season he is leading the side, and takes the position of second rover. While such a player as the Carlton captain cannot be misplayed on the field, he is a much more dangerous man when playing half forward than when roving. In 1914-15 Carlton were a good, strong, hefty side, and, although the competition was limited, there was no more prominent player on the side than Fisher."
(Trove: Australasian July 19 1919, p26)

In June 1919 The Argus wrote that there was dissatisfaction and player friction at Carlton. It was rumoured that Fisher did not take the field against Richmond because he wanted a transfer to Brunswick. Carlton secretary Reginald Hunt, in reply, wrote a letter to the Argus' editor refuting these allegations.
To read a reproduction of the reply click on Hunt's name above.