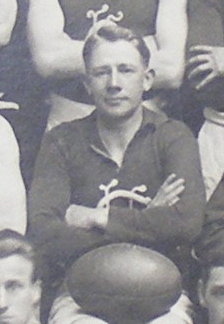 Gordon Green was a lightly-built, fair-haired rover from Yarrawonga who was brought to Princes Park by former Carlton champion Jim Flynn in 1911. Flynn was convinced that despite Green’s small stature and his quiet, unassuming manner, he was a ready-made league footballer. That assessment proved spot-on.

Green slotted straight into the Carlton line-up, where his elusiveness, ground skills and accuracy around the goals soon made him a dangerous proposition. He was chosen in the Victorian state side in 1913, played at full-forward when Carlton beat South Melbourne for the 1914 Premiership, then was back roving when the Blues knocked over Collingwood to claim the flag once more in 1915. Shortly after that double triumph, like so many young men of that era, Gordon signed on to fight in the Great War. Happily, he was one of the lucky ones who returned unscathed.

Carlton welcomed Green back into its team for the 1919 season. By then aged 29, he used his experience effectively as a permanent forward, before being shifted into the centre when captain Rod McGregor retired. In the pivot, Green blossomed again to become a star of the competition. He made the Victorian team for the second time in 1921, and in September of that year, captained the Blues into the Grand Final against Richmond. The Tigers won by four points in a dour, slogging match on a wet MCG. Richmond kicked only five goals, Carlton just four. Gordon Green retired from league football after that game, and returned to the bush. In his 92 games for the Blues in ten interrupted years, he had kicked 85 goals and worn five different guernsey numbers.