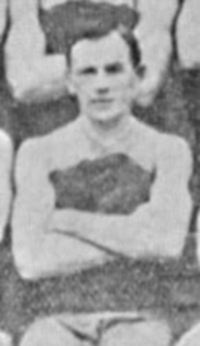 Born in Geelong in 1875, Alfred Ernest (Ernie) Walton was one of the early greats of the Carlton Football Club. A resolute defender who was renowned for his prodigious place kicks, he was already established as Carlton’s centre half-back and vice-captain when the Navy Blues played their first match in the VFL in 1897. Therefore, he is officially listed as Carlton player number 2, given his role as deputy to Carlton’s captain Jimmy Aitken on that landmark afternoon when the modern history of the club began with a six-goal loss to Fitzroy.

Ernie’s journey to Princes Park began with country club Rainbow, and progressed through inner-suburban Austral before his arrival at Princes Park in 1894. By 1897 he was recognised as the Blues’ key defender when the Carlton committee decided to drop out of the VFA, and join seven other defecting clubs in forming the Victorian Football League.

After a demoralising first season in the new competition, Walton was promoted to the captaincy when Aitken sensationally quit his post after the first two games of 1898. In turn, Henry McShane took over the leadership in 1899, while Ernie continued to serve as his vice-captain. Steady, consistent and durable, Walton was the first player in Carlton’s history to notch up 50 and 100 games - the latter in Carlton’s 105th League match.

During Carlton’s first five seasons in the VFL, the Navy Blues finished seventh each year – avoiding the wooden spoon only because St Kilda were so inept. The Saints didn’t win a game throughout the first three years of the competition, and by 1901 had tasted victory just twice in 73 matches. To be fair, Carlton’s tally of 15 wins and a draw wasn’t that flash either, but the appointment of former Fitzroy champion Jack Worrall as Secretary-Manager of the Blues in 1902 soon changed all that.

Worrall took Carlton into their first-ever finals campaign in 1903, and Walton etched his name into the history books once more as part of the team that went down to Collingwood by 4 points in a Semi Final thriller. By 1904 Ernie was at the veteran stage of his career, and regularly playing in a back pocket, but his experience proved invaluable when the Blues made the play-offs again. After edging-out Essendon in another cracking Semi Final, the Blues lost their maiden Grand Final showdown by 24 points to Fitzroy.

Walton retired from the field after that historic day, but maintained a close association with the Blues for the rest of his life. He served the club in the role of Treasurer from 1911 to 1913, while living a long and varied life until his eventual passing in 1946 at the age of 71.

At the Carlton AGM 06 April 1899 Ernie Walton was presented with a long service testamonial.

Bookmaker Ernie Walton passed away at his Brighton home after a short illness on Friday 23 May 1946.

1894 May 05:
Debuted for Carlton in the first round match against Footscray at Footscray.

Ernie Walton was mentioned in The Argus of February 11 1941, as a present-day bookmaker.

In an interview published on the CFC website in 2012, Walton’s surviving daughter Celine Parkinson challenged the notion that two Hawthorn spinsters wrote the words of the club anthem and set them to the melody of Lily of Laguna, claiming instead that it was her father. “That song was one of his favourites, and I’m quite certain he put the club lyrics to that song,” she said. “He had this gift of reworking the lyrics of a popular tune to suit the occasion, and that’s why I always had the impression he put the Carlton lyrics to Lily of Laguna”.