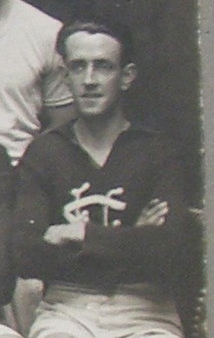 In 1912, 18 year-old Edrick Bickford played his first, and only, VFL match for Essendon. Ten years later, he played his 22nd and last VFL game for Carlton. In between, he served his country in two of the bloodiest campaigns of the First World War.

Born in the inner-western Melbourne suburb of Kensington in 1894, Edrick Dillon Bickford worked as a confectioner after leaving school, and honed his football skills with the Brougham St Methodists in what was then a strong Suburban Churches competition.

In 1912 he was recruited by Essendon, but played just once in the black and red before returning to his home club. Two years later, in August, 1914, Europe was plunged into the horror of yet another war when Germany invaded Belgium, and Great Britain and France came to the aid of their ally.

In Australia and throughout the British Empire, young men and women answered the call to arms and flocked to the recruiting centres. Among them was Edrick Bickford, who was quickly accepted because he had already benefited from five years of training with a Militia (Army Reserve) artillery unit. He was promptly promoted to the rank of corporal and, in September 1915, sailed with reinforcements for the fabled and futile campaign at Gallipoli.

After the evacuation of the peninsula, Bickford was sent to France, where he endured some of the heaviest fighting of the war. In the mud and slush of the trenches, he served for two years under incessant shellfire. He was promoted to Sergeant in September 1917, and when the war ended on November 11, 1918 he was acting as Company Quartermaster Sergeant of the 3rd Field Artillery.

Happily, Bickford returned home safely and like hundreds of thousands of others, tried to resume his former life - which of course meant pulling the boots on again for a game of footy. Sometime in the following twelve months – as every VFL club looked to boost its playing list with returned servicemen – Bickford was invited to have a run with the Blues at Princes Park.

Edrick obviously impressed Carlton coach Norman Clark enough to be named in the senior team for the first time in round 8 of the 1920 season, against Collingwood at Victoria Park. He lined up on one half-forward flank (alongside champion Horrie Clover) with another debutante; Clarrie Calwell on the opposite flank. Led by their star full-forward Gordon Coventry, Collingwood won by 19 points, but Bickford showed enough to hold his place in the team right through to the finals.

Carlton finished third after the home and away rounds of 1920, and knocked over Richmond by 23 points in one semi-final. On a heavy, rain-swept MCG, Bickford was a solid contributor with two goals in a low-scoring slog, as the Blues booked a Preliminary Final berth against Collingwood. A further week of rain in Melbourne guaranteed another heavy track for the clash, and although the Blues went in with confidence, the Magpies’ small men dominated all day as they won by four goals.

Season 1921 also ended in disappointment for the Old Dark Navy Blues – especially after we finished the home and away rounds as minor premiers, and took revenge on Collingwood with a 13 point semi-final victory. Bickford didn’t play in that defeat, but returned for the Preliminary Final against Richmond when Horrie Clover was injured. Bickford managed one goal in another low-scoring maul of a game that the Tigers won by 8 points.

As minor premiers, Carlton exercised their right to challenge Richmond to a Grand Final showdown, and strengthened the team by including Clover – at Bickford’s expense. Edrick could only watch on as Richmond – led superbly by their captain Dan Minogue – beat Carlton by just 4 points in another cliff-hanger.

The dual disappointments of missing out on a place in a Grand Final side, then watching on as that team was beaten, brought the curtain down on Edric Bickford’s career. He was to play just once more for the Blues (in round 3 of 1922) when his career finished as it had begun – with a defeat by Collingwood at Victoria Park.

His return of 22 goals in his 21 games is evidence that Bickford was a handy forward who knew where the goals were. Had it not been necessary for him to dedicate more than half a decade of his football career to the service of his country, it is not inconceivable that he could have been a star of his era.