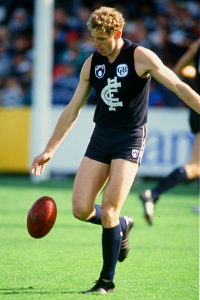 
In just his sixteenth senior game for Carlton, tall blonde defender Ian Aitken was an acclaimed member of the Navy Blues’ victorious 1987 Grand Final side. Earlier in his debut season he had suffered a broken jaw, but had recovered in time to take part in Carlton’s finals campaign. On his return he quickly found form, and after collecting his Premiership medal, was honoured with the inaugural AFL Players Association Rookie of the Year award.

Only weeks after those twin triumphs however, Aitken was the victim of a callous king-hit during a controversial exhibition match against North Melbourne in London. In the second quarter of a vicious match dubbed the “Battle of Britain” by the local newspapers, Ian was punched from behind by the Kangaroos’ Alistair Clarkson, and the young Blue’s jaw was smashed for a second time. Although he went on to eventually rack up 66 games in an injury-plagued seven seasons at Carlton and St Kilda, Aitken was clearly never quite the same player again.

Ian grew up in Melbourne’s northern suburbs and was educated at Coburg Primary and Coburg High School, where his ability on the football field was first recognised. He was playing for Strathmore in the Eastern Districts Football League when he was recruited to the Carlton Under-19 squad, and promptly underlined his potential by winning the team’s 1985 Best and Fairest award. By 1986 he was regularly being promoted to the Blues’ Reserves team, and at the culmination of that year he was one the stars of Carlton’s victory over Footscray in the Reserves Grand Final - on the same day that the club’s seniors were soundly defeated by Hawthorn.

Heading into 1987, Carlton’s match committee knew that the team’s defence had to be bolstered to match the rampant Hawks and their champion full-forward Jason Dunstall. Aitken and another promising youngster in Stephen Silvagni were quickly promoted, and Aitken wore Carlton’s number 22 guernsey out on to the vast expanses of Waverley Park to play his first senior match against Collingwood in early April. Starting from the interchange bench, Ian was eased into the action and picked up 10 disposals, including a set-shot for goal late in the match. His kick sailed straight through for his first career goal, and set up a narrow win for his team.

By the latter part of that season, Aitken and Silvagni were settled into Carlton’s defence, and impressing everyone with their versatility. In Ian’s case, he was big enough for a key position, but equally at home on a flank or in a pocket, where his aerial skills were complemented by steely concentration. In round 14, 1987 at Waverley, Carlton and Hawthorn met for the second time in that season, and late in the game, Aitken bent low to pick up the ball and was hit hard by an opponents’ hip. That impact broke his jaw and cost him a month on the sidelines, but as soon as he was given a medical clearance he was straight back into the Blues’ line-up. Carlton finished the season on top of the ladder, and qualified for a second successive Grand Final against Hawthorn on a blisteringly hot day at the MCG. 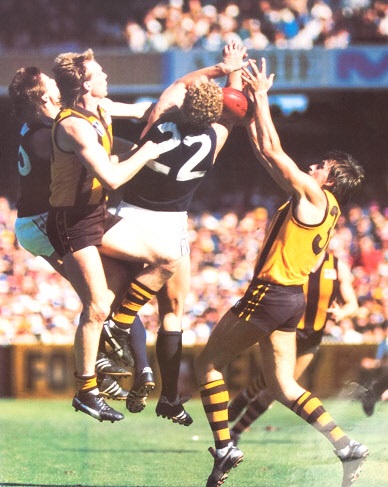 The 1987 Grand Final will be remembered for many reasons, including the extreme heat, another huge crowd, and the impenetrable Carlton defence led by Norm Smith Medallist David Rhys-Jones. All of Carlton’s back six; Mick Kennedy, Stephen Silvagni, Peter Dean, Ian Aitkin, Rhys-Jones, and Tom Alvin – either shaded or comprehensively beat their opponent on the day, in a glorious five-goal Carlton victory.

Afterwards, amid the extended celebrations of Carlton’s fifteenth flag, Aitken was acclaimed as Rookie of the Year before the entire team jetted off to London to play an exhibition match against fellow 1987 finalists North Melbourne. Held at The Oval in South London, the game attracted a crowd of 18,000 and was intended to showcase all the spectacle and skills of the Australian game. Instead it turned into an ugly brawl sparked by Clarkson’s assault on Aitken. With nothing left to prove, the Blues approached the game as a bit of fun, while North Melbourne arrived at the ground with a chip on their shoulder and mayhem on their minds.

The incident involving Aitken and Clarkson wasn’t the first in the game – indeed there was niggle and some cheap shots from the first bounce – but when Aitken went down in the second quarter the entire Carlton team went looking for retribution. The match ended in a hollow victory for the Shinboners and with seven players reported - including Clarkson, who was later found guilty and suspended for 4 games.

Once recovered, Aitken saddled up for Carlton in 14 games in 1988, including consecutive finals losses to Hawthorn and Melbourne. He played another 15 matches in 1989, then suffered the first in a string of niggling injuries that eventually ended his tenure at Princes Park. When he wasn’t injured, Ian was still a worthy competitor – as shown by his role in Carlton’s Reserves Premiership in 1990 – but by 1992 he was on the outer with the Blues’ match committee and requested a transfer to St Kilda.

Unfortunately for both parties, Aitken’s move to Moorabbin lasted just one season. Ian and Saints coach Stan Alves didn’t hit it off, and Ian managed only five games before retiring at the age of 26 in 1993. His last game for St Kilda ended his career where it started – at Waverley in round 22, 1993 when the Saints thrashed Richmond by 43 points.

In 1996 Ian Aitken played in the VFA with Coburg where he played 10 games and kicked 2 goals.

In hindsight, Aitken’s retirement probably came at an opportune time. He decided to move into coaching and was able to combine his love of surfing with assignments at bayside clubs Cowes and Barwon Heads. Later, he established and supervised football programs at Xavier College and Box Hill Secondary College. In 2013 he coached Kew to a Premiership in Division 3 of the Victorian Amateur Football Association and was honoured as Coach of the Year. He followed up by winning flags again in 2014 and 2015, lifting the club up a division each time.

In December 2015, Aitken’s football journey came full circle when he was appointed senior development coach for the Northern Blues. The General Manager of Carlton’s VFL affiliate, Garry O’Sullivan, welcomed Ian back to Princes Park by saying “He's got a terrific coaching and developing record when it comes to nurturing younger players, and his man management skills are second to none.”

The Kew FC appointed Ian Aitken as its senior coach for 2011. Following his AFL career at both Carlton (premiership player in 1987) and St Kilda, Ian has played and coached at various clubs including a Senior A-Grade premiership at Strathmore (1998) in the EDFL. Ian was the founder of Vic Cric in 1993, a program for young children learning skills in cricket and was also the founder of Vic Footy, a similar Australian Rules Football program. Aitken maintained local involvement in the Kew Rovers and Kew Comets junior football clubs including coaching of the Yarra Junior Football League team, Kew Colts Kangaroos.

Aitken began his playing career at Carlton in guernsey number 53 and wore it in the Blues’ Reserves Grand Final victory over Footscray in 1986.

Ian is the uncle of Sydney Swans Premiership star Daniel Hannebery, and his brother in-law is former Blue Luke O'Sullivan.

1. The country\'s Greatest Asset out on show.jpg