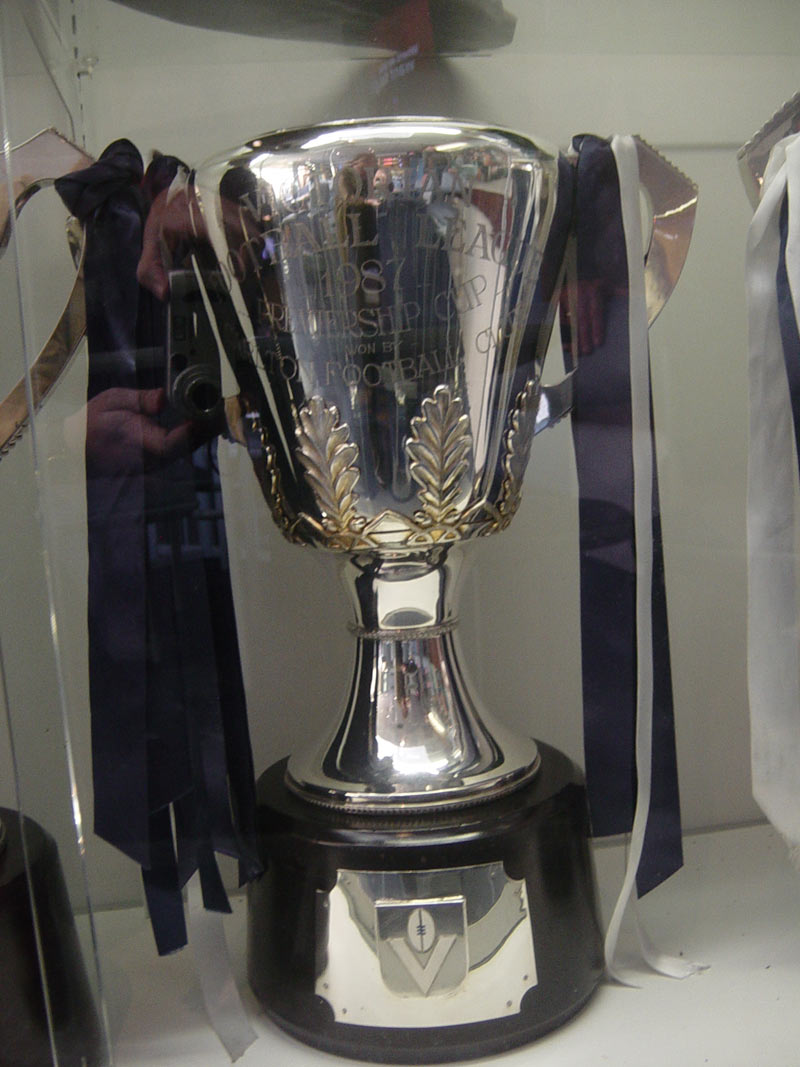 On the Carlton front, another change was the elevation of second year player Stephen Kernahan to the captaincy, a position he would hold for 11 seasons until his retirement. The Blues would start the season with a replay against fellow 1986 Grand Finalists, Hawthorn. The club had struggled with the Hawks in the previous four season, and this game was no exception, Carlton losing by 45 points in the season opener.

In the rest of the season, the Blues continued on the improvement of the past few seasons to be one of the dominant teams, finishing on top of the ladder with an 18 win, 4 loss record. Impressively, apart from the Round 1 loss to the Hawks, we were competitive in every game and our other three losses were by margins of only 7, 1 and 3 points respectively. A final home and away round victory over North Melbourne guaranteed Carlton top stop on the ladder, and more importantly a weeks' rest leading into the finals and a double chance.

Leading into the Semi Final against Hawthorn the clubs fans had a right to be nervous, Hawthorn had beaten us twice during the regular season and in nine of our last ten encounters. The Blues trailed at every change, but only poor kicking kept us from leading, and 5 last quarter goals were enough to win a low scoring match. We had prevailed by 15 points and won a Grand Final berth, but with 10 more scoring shots we had kept the Hawks in the game for far too long.

Hawthorn would beat Melbourne by 2 points in a tight Preliminary Final, to set up a rematch in identical circumstances to 1986. This time, however, the tables would be turned. After a tight first quarter, Carlton would outscore the Hawks in the last three quarters to run out 15 point winners - 15.14 (104) to 9.17 (71). Carlton had won Premiership number 15, our third flag in the 1980's and had exacted revenge for our loss to the Hawks in 1986.

It was a huge year for the Captain, Stephen Kernahan, who would lead the Club in performance, goal-kicking, was the winner of Carlton's best & fairest award and would cap off a huge year with the Premiership Cup. Sadly, two players from the 1986 Grand Final could not play in the 1987 flag winning side. Peter Motley was seriously injured in a car accident in early 1987 that left him with serious head injuries and unable to play football again and popular defender Des English had been diagnosed with cancer. These twin tragedies galvanised the Blues, who dedicated their year, and their finals campaign, to their stricken team-mates. Stephen Silvagni would later write: "When we thought we were doing it tough, we only had to think of what ‘Mots’ and Des were going through to snap ourselves out of it".

The Blues successfully defended their Reserves Premiership Crown, taking their 7th flag at this level.