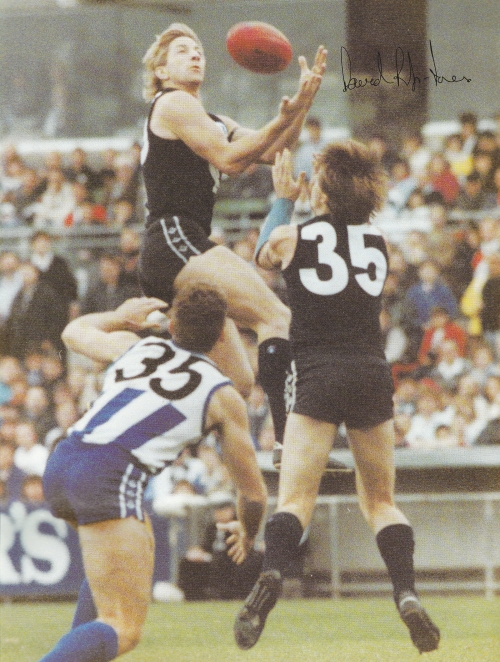 
Superbly skilled, fiery, volatile - these are all apt descriptions of the enigmatic David Rhys-Jones, who starred for the Blues in the 1987 Grand Final triumph over Hawthorn, in the middle of a 12-year VFL/AFL career studded with controversy and repeated trips to the tribunal.

“Reese” played his first senior game for South Melbourne in 1980. At 188 cm and a slender 73 kg, he soon established himself as one of the game's tallest and best wingmen. His pace, cat-like balance and wonderful aerial skills made him a match-winner – although his short fuse regularly had him before the tribunal, and he was a constant target of abuse by opposition supporters.

When South Melbourne headed north to become the Sydney Swans in 1982, Rhys-Jones was among those who supported of the move, at least at first. But after two seasons under the private ownership of Dr Geoffrey Edelsten, David began to have doubts about his future, and asked for a clearance. He had played 76 games and booted 39 goals in red and white by then, graduating from a skinny winger into a hard-bodied, tough utility. Despite his undoubted ability, many eyebrows at Carlton were raised when it was revealed that Rhys-Jones was on his way to Princes Park for the 1985 season. The news was not greeted warmly by all Blues' supporters, and the blonde youngster in guernsey number 26 struggled for general acceptance in his first two seasons - especially when some brilliant games were indispersed with regular trips to the tribunal.

All that changed however, in 1987. The previous year, Hawthorn had ended Carlton’s Premiership hopes with a 42-point demolition of the Blues in a Qualifying Final, during which Rhys-Jones had been reported and suspended for two weeks for striking Hawk defender Gary Ayres. Whispers that the club’s patience was wearing thin circulated for a while, but Carlton coach Robert Walls stuck with his blonde bombshell, and Reese paid him back with interest.

Although he was reported in four matches (on seven charges) during the 1987 season, David still managed to play 20 games and was a model of consistency. The Blues finished on top of the ladder and firmed into flag favourites by beating Hawthorn in the second Semi Final, before facing the Hawks again a fortnight later in the Grand Final. Pre-match, most pundits agreed that the key to victory for Hawthorn would be their champion centre half-forward Dermott Brereton, and that his scheduled opponent, Jon Dorotich was in for a torrid afternoon.

Therefore, there was huge surprise immediately after the toss, when Rhys-Jones picked up Brereton, and Hawthorn supporters began licking their lips. The Hawks' star was heavier, stronger and a proven big match performer - but David played superbly disciplined football all day and Brereton was hardly sighted. The Hawk star managed only two behinds, while Reese constantly drove the Blues into attack on the way to collecting Carlton’s 15th Premiership by 33 points. Fittingly, Rhys-Jones won the Norm Smith Medal as Best on Ground, and the plaudits (at last) of every Bluebagger fan.

Rhys-Jones played finals football in each of his first four years at Carlton, and notched up his 150th career game when Hawthorn took revenge on the Blues in the 1988 second Semi Final. Thereafter however, the team fell into decline as injuries and retirements left their mark. In 1991, David started the year at full-forward in Carlton’s Reserves side, and kicked 17 goals in the first three matches. He was recalled to the seniors to play against Geelong in round 5 – his 100th game for Carlton – but suffered a knee injury that hampered him for the remainder of his career. His last game in navy blue was played a long way from home, at Subiaco Oval in round 24, 1992, when Carlton went down to the West Coast Eagles by 33 points.

Although his AFL career ended that day, Rhys-Jones was far from finished with the game. His involvement would continue, albeit with the handicap of a reputation that often coloured other peoples’ perception of him, and attracted attention from wannabes looking for a well-known scalp. As always, David fought fire with fire, and it continued to cost him.

In 1993, Rhys-Jones headed to Tasmania as captain-coach of TFL club North Launceston. He relinquished the coaching position in 1995, but stayed on as captain. Still his tribunal appearances continued, and in May of that year he was assaulted by a spectator on the ground at three-quarter time. In September, he led the Robins to their first-ever Premiership with a 10-point Grand Final victory over Clarence, before retiring from the field at the age of 33.

The following year, Reese returned to Victoria to coach Frankston in the VFA. The Dolphins suffered a heat-breaking loss to Springvale with the last kick of the Grand Final in ’96, then lost only their fourth game in two years when they fell to Sandringham in the 1997 decider. They made the finals for the third year in a row in 1998, only to go out in straight sets and trigger Rhys- Jones’ resignation

Next up, he spent 2001 at the helm of Diamond Valley Football League heavyweights Heidelberg, before embarking on adventures in the world of reality TV with the Channel 7 production The Club. One of the central figures in the program, Rhys-Jones took a camera crew along while he coached the Kensington Hill Hammerheads in the second division of the Western Region Football League.

In the decade or so since, Rhys-Jones has concentrated on building a media career, and these days is regularly seen on the ABC coverage of VFL games.

During his 182-game VFL/AFL career, Rhys-Jones faced the tribunal 7 times while playing for the Swans, and 18 times while representing Carlton. He was not always found guilty however, and was ‘only’ suspended for 11 games at each club, including two separate 4-week penalties for altercations against Melbourne in 1981 and 1983.

Furthermore, David was involved in a total of 17 reports were he was the victim; 16 striking charges, and one of "throwing to the ground". Offenders in those cases were found guilty on 13 occasions, and outed for a total of 24 weeks.

Besides Greg Williams (who himself was suspended for striking Rhys-Jones during his time with Sydney) other Carlton players who tangled with Reese were Brent Crosswell and Peter Smith - who was acting as the Melbourne runner at the time! Interestingly, future AFL Chief Executive Andrew Demetriou (hardly renowned as a physical player) was also reported for striking David.