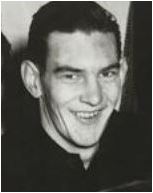 Like Club legend Robert Walls, Jack Ellis was recruited by the Blues while he was still a student at Coburg High School. Unlike 'Wallsy' however, he spent a long apprenticeship in the Under 19 and Reserves teams.

Jack wore guernsey number 8 when he finally made his senior debut in 1955. He played six games and booted seven goals in a promising first year, but just four more games and six more goals followed in his last two seasons.

Jack Ellis, 20 year old 6ft full forward booted 11 goals in the 1954 Reserves Second Semi Final against Melbourne. His performance was described as "phenomonal," with his quick leads, good hands, and the ability to kick either foot, the report said he would be a certainty to play senior football in 1955.
As good as his 11 goals were, they were not enough to stop a rampaging Demon side coming from 32 points down at the last change to snatch victory over a tiring Blues team. They only hit the front with a 50 yard drop kicked goal after the siren!
The following week Jack kicked 6 goals against Richmond in the preliminary final.
See 1954 Reserves