Best on Ground on debut... 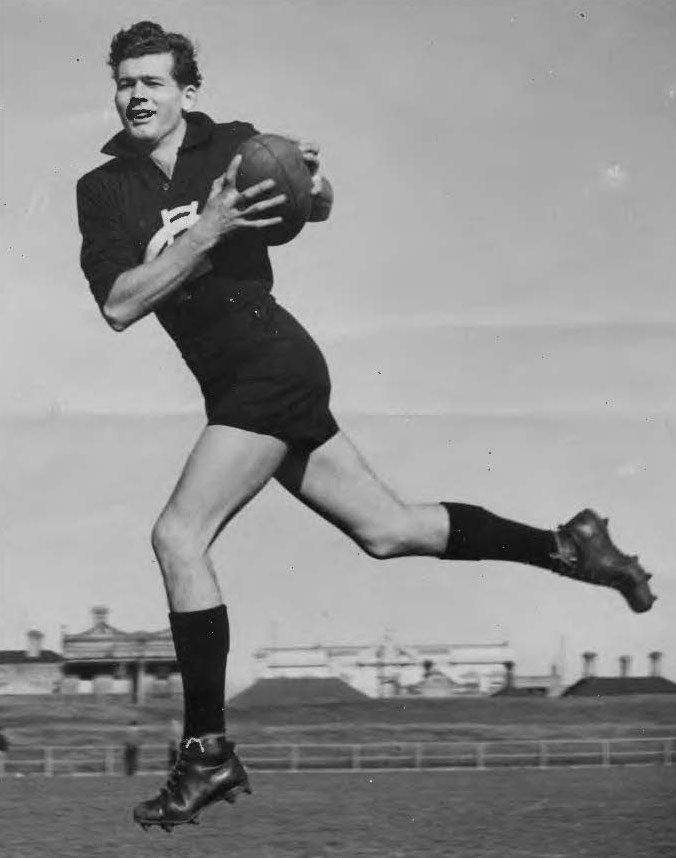 It is difficult to escape the conviction that with bit more luck and dedication, Ken McKaige could surely have played more than 19 VFL matches with Melbourne and Carlton between 1951 and ’54. A full-back who was a minor sensation in his first few outings with the Blues in 1953, he suffered a broken arm in his second year, and retired before his 25th birthday.

Originally from Old Melburnians, McKaige joined the Melbourne Football Club in 1951, playing nine senior matches and kicking his only career goal at a time when the Demons were at a very low ebb. At the same time, the Navy Blues were searching for a successor to the club’s champion full-back Ollie Grieve, who finished up in 1952 after Carlton’s early exit from the finals.

Convinced that the opportunities at Carlton were greater than at Melbourne, McKaige crossed to Princes Park before the start of the following season and made his senior debut in guernsey number 8 against North Melbourne at Princes Park in round 7, 1953. The Blues destroyed the Shinboners by 52 points that afternoon, with McKaige outstanding at full back. "His superb marking and kicking - he wore out two North full forwards - and never faltering courage and tenacity made him easily the best man afield,” said The Age newspaper. It was a fine start in new colours for McKaige, and there was more to come.

In round 8 at Windy Hill, Essendon’s champion full-forward John Coleman seemed set for a huge bag when he outsmarted and outmarked McKaige to kick five goals from five kicks in the second quarter. But the plucky new Blue stuck to his task, and held the Bomber star to just one more major for the rest of the match. Although Essendon won by 45 points and Coleman was the focus of their attack, Ken won plenty of kudos for his grit and steely concentration.

After that however, McKaige’s form began to tail off. Carlton won three of the next five games, before he was sent back to the Reserves in July to freshen up. Late in the year he was excellent throughout the lower grade finals, and was among the stars of the Blues’ 1953 Reserves Grand Final victory over Essendon.

Meanwhile, other players on Carlton’s list had been busy seizing their opportunities. When 1954 began, McKaige somewhat surprisingly found himself the club’s third-ranked fullback, behind George Ferry and Alex Boyle. Ken was a late inclusion at centre half-back in an injury-ravaged Blues line-up in round 2, and was playing just his third game for the year when he suffered a broken bone in his forearm in Carlton’s win over Geelong in round 7.

He recovered to play Reserves football again late in the season, and wore the navy blue strip for the last time when Carlton was comprehensively beaten by Richmond in the ‘54 Reserves Preliminary Final on the MCG. Shortly afterwards, he was delisted by the Blues and crossed to Camberwell in the VFA for the 1955 season, where he played only another handful of matches before hanging up his boots for good.

In the years after his career ended, McKaige returned to his original club Melbourne, and was very active as President of the Demons’ Past Players Association. Also a keen lawn bowler, he organised an annual competition between VFL/AFL clubs that is still popular today. Following Ken’s death at the age of 80 on Grand Final day 2009 (September 26) the trophy for this competition was renamed the Ken McKaige Shield in his honour.

In 1973, McKaige's four sons - Cameron, Rohan, Andrew and Mark - all signed with Melbourne to ensure that they weren't residentially tied to Richmond. At the time Cameron was just five years old, the youngest person ever to be signed to a League club. Rohan and Andrew later played Under 19 and Reserve football with the Demons.

In round 1, 2010 the Carlton team wore black armbands to commemorate three former players; Kevin Clarke, Clen Denning and Ken McKaige – all of whom passed away between seasons.