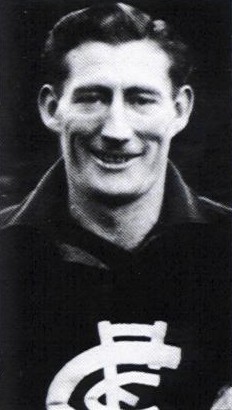 Throughout our long and proud history, the Carlton Football Club has traditionally produced exceptional full-backs. For seven seasons immediately after World War II, Carlton’s champion custodian of the goal square was Oliver Kelvin ‘Ollie’ Grieve – a brilliant, close-checking defender who was a glorious high mark and a powerful, driving drop-kick.

Grieve came to Princes Park from his home town of Bacchus Marsh in 1942, but managed only six matches in his debut season before his football career was interrupted while he served his country in war. Already a reservist, he was called up by the Australian Army in July 1942, and spent the next three and a half years in uniform. Gratefully unscathed at the war’s end, he came home to anchor the defence in the Blues’ 1947 Premiership team, and twelve months later, finished runner-up in the 1948 Brownlow Medal.

Wearing guernsey number 26, Ollie played his first half-dozen games at centre half-back, then had to wait more than two years to play his seventh match - while he was on leave - in the last round of the 1944 season against Footscray at Princes Park. Carlton needed only a draw to make the finals that day, but fell to the Bulldogs by one point. Grieve wore number 13 for the first and only time in that match. He played as a follower (or ruck rover) and kicked two goals.

In May 1945, the war ended after two Japanese cities were vaporised by atomic bombs. Ollie was eventually discharged from military service in January 1946, and joined hundreds of other football-hungry ex-servicemen who were thronging back to their former clubs. He pulled on his third different number (27) and played the first three matches of that year – again as follower - before Carlton coach Percy Bentley acted on a hunch and sent him to full-back. That move was a masterstroke. Along with his considerable football ability, Ollie had been born with the sportsman’s priceless gift of unshakeable concentration – a quality that brought a new star to the last line of defence for the Blues.

With Grieve settled in at full-back and the equally brilliant Bert Deacon at centre half-back, Carlton’s defence was the launching pad of the Blues’ magnificent, last-gasp Premiership triumph in 1947. Trailing Essendon by five points inside the last minute of the Grand Final, Carlton’s captain Ern Henfry pumped the ball long out of the centre to a contest at half-forward. The ball spilt from the pack and was pounced on by flanker Fred Stafford, whose neat left foot snap went sailing between the posts to give Carlton an astonishing victory by one point.

Ollie Grieve, Henfry and big-hearted ruckman-forward Fred Davies were standout players for the Blues on that unforgettable day. Three weeks earlier, Bert Deacon had become Carlton’s first winner of the competition’s highest individual honour; the Brownlow Medal – which provided our club’s delirious supporters with further cause for celebration.

The Blues’ Premiership hangover in 1948 manifested itself in a number of surprise defeats, and sixth place on the ladder at season’s end. The highlight of a mystifyingly poor year was the rare form of Grieve at full-back. Brave and resilient, he played his heart out every week for the Blues and didn’t miss a match. He represented Victoria mid-season, and on Brownlow Medal night, was recognised as one of the game’s outstanding defenders when he finished second (by three votes) to one of the favourites; Richmond ruckman Bill Morris.

However, perhaps the one game that stamped Ollie Grieve as one of the greats of his era was Carlton’s humiliating defeat by Essendon in the 1949 Grand Final. Spearheaded by their sensational full-forward John Coleman, Essendon thrashed the Blues by 73 points. One report from that match said (in part); ’by half time, star players on each side had been singled out and roughed up – with the exception of Coleman – who Grieve was beating on sheer ability.’ 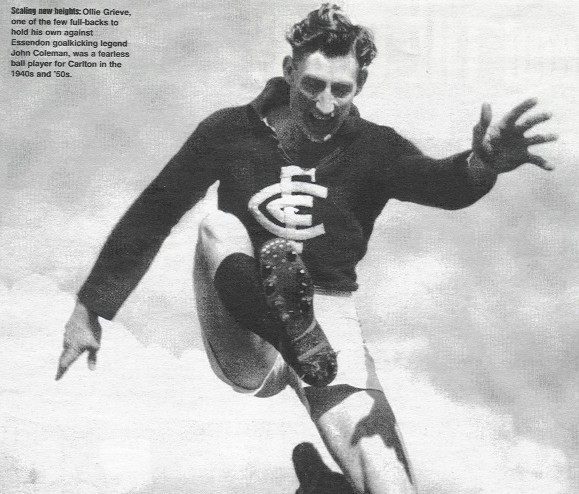 Coleman had started the game needing six goals to crack 100 for the season. However, by the last change Grieve had been heroic in keeping the Bomber star to only two successful shots at goal from a mountain of opportunities. Still, Essendon were ten goals up and in complete control. Throughout the last quarter the Bombers thought only of getting the ball to Coleman by hand or by foot, and in the end, he achieved his dream when he punted through number six with only a minute or so left on the clock. Coleman got his reward, but Ollie Grieve won universal admiration for his grit and determination against enormous odds.

In 1958, St Kilda defender Neil Roberts won the Brownlow Medal. Later, he became a familiar face on television as a panellist and commentator. One of Roberts’ favourite football stories involved Ollie Grieve, and the day Roberts - St Kilda’s nervous young recruit - was assigned to play against him in a pre-season lightning premiership match.

According to Roberts, Grieve simply refused to let him get near the ball in the first half, and Carlton skipped away to a big lead. Finally, a frustrated Roberts blurted out at the Carlton champion, ‘What about letting us have a kick?' 'It was his last year of league football and he must have taken pity on me, because he said, ‘alright, you can have three.’ I led out in front of him and got the ball three times and kicked 2.1. He then said, ‘no more’ – and I didn’t touch it again!’

Grieve’s nine-year, 137-game VFL career wound up with Carlton’s deeply disappointing 1-point loss to Fitzroy in the 1952 Semi-Final. Woefully inaccurate in front of goal, the Blues had nine more scoring shots than the ‘Roys and still found a way to lose. Still, Ollie’s tenure at Princes Park finished on a high note when he won Carlton’s Best and Fairest award at last, on the eve of his departure.

The following year, Grieve took up an appointment as playing coach of Bendigo League club Eaglehawk, and later rounded off his playing days with Sunraysia club Irymple. Some years afterward he moved to Perth, where he passed away prematurely at the age of 58 in February, 1978. In 1994, Ollie Grieve was remembered with deep affection when he was inducted into the Carlton Hall of Fame.

In a footnote to Ollie’s story, his second cousin was Jeff Grieve, who played 11 games for South Melbourne during 1941. Jeff served with the RAAF during WW II as a Flight Sergeant, and was tragically killed in action when his aircraft crashed in Scotland on November 11, 1944. Carlton’s former General Manager of Finance and Administration, Jason Reddick, is also related to Ollie. 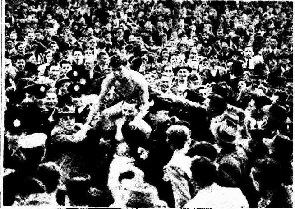 The Best Full-Back
In the 1971 Football Life poll for the best full-back of all time, Ollie Grieve was placed third overall. He was runner-up to the late Bill Morris, of Richmond, for the 1948 Brownlow Medal, he played 137 games with the Blues and won the club's best and fairest award in 1952. In all, he had 11 years with Carlton. In 1947 he was full-back in Carlton's premiership team. Grieve was also a player who loved to back his judgement. He had pace, anticipation, was a glorious mark and even more glorious kick. One of the delights of watching Carlton in the late forties and early fifties was the tremendous drop-kicking of Grieve. When kicking in he repeatedly put the ball near the centre circle. Grieve had goals kicked against him - Coleman often did because he often played too much of an attacking role. It was not uncommon to see Grieve outsmart the full forwards with sheer football talent. In many ways it's a pity Grieve could not have played on the forward line. Because he often played the full-back role like a full-forward, yet at the same time, broke the hearts of many aspiring and seasoned spearheads. - Football Life