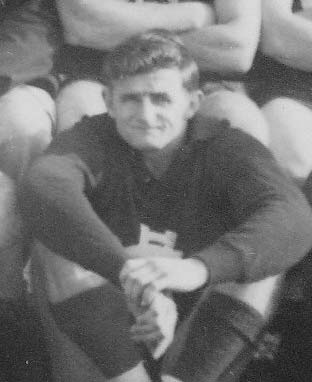 Nick-named “Icy,” due to his fondness for icy poles when he was a child.
Kevan Hamilton found his way to Princes Park in 1956 from McKinnon via Melbourne seconds. A tall rover and dangerous forward pocket, he was Melbourne Reserves’ Leading Goalkicker in 1955 with 35 majors. Early the following year however, he was sacked by the Demons’ legendary coach Norm Smith after a clash during a pre-season practice match. Smith believed Hamilton had sworn at him, and while the player denied it, there was no arguing with a premiership-winning coach and “Icy” was cut from the list.

Hamilton started his career at Carlton impressively by kicking eight goals in his first two matches, and by midway through his debut year was regularly selected as the Blues’ first rover. But as the season progressed, Kevan’s form tailed off as opposing teams began marking him closely. Still, his last nine matches produced 14 goals, and his total of 22 for the year was enough to win him Carlton’s goal-kicking award – albeit with one of the lowest tallies for five decades. Perhaps more remarkably, the Blues still wound up fifth on the ladder, missing out on a finals berth by just two points.

Hamilton was apparently reluctant to stay on at Carlton after his debut season, preferring instead the more relaxed situation at his original club McKinnon. He asked Carlton for a clearance, but the Blues refused. After wearing guernsey number 5 throughout his debut season, “Icy” spent most of 1957 playing reserves football in number 29 and didn’t add to his tally of senior games.

Bowing to the inevitable, Carlton released Hamilton at the end of 1957, and he returned to McKinnon as captain-coach. Over the following decade, “Icy” became one of the all-time greats of the Federal League, winning the competition Best and Fairest no less than five times. Kevan was inducted into the SNFL Hall of Fame in 2015,

"He joined Carlton a few weeks later and enjoyed a stellar debut season, booting eight goals in his first two
matches and finishing the year as the club’s leading goalkicker with 22 majors. But after spending the
entire 1957 season in the Blues’ reserves, he was finally granted his wish for a clearance back to his original
club McKinnon.
From there Hamilton then went on to become arguably the greatest player the Federal Football League has
ever seen. Blessed with tremendous pace and skill, Icy was a five-time recipient of the J W Allnutt Trophy
as the League’s fairest and best player (including winning four in a row between 1961 and 1964).
But his biggest asset was his lethal right foot. With an uncomplicated, fluid action, he was a beautiful kick
of the football and rarely missed a target. He could give the ball a mighty roost as well, and regularly
practiced having shots at goal from the centre of the footy ground with his older brother. Hamilton also
once won a long kicking contest at the Williamstown football oval in 1956 with massive 75-yard (68.5m in
the current measurement) bomb.
After his playing career ended, his good friend Tom Hafey asked him to join Richmond as kicking coach in
1975. Hamilton gladly accepted and spent three years at Tigerland with T-shirt Tommy.
Despite compiling an outstanding football CV over the years, Hamilton’s modest nature meant he was
always reluctant to talk about his achievements. But his induction in to the SFNL Hall of Fame will ensure
that his name is forever remembered as one of the greatest footballers of a bygone era."
From: http://sfnl.com.au/wp-content/uploads/2015/07/Kevan-Icy-Hamilton.pdf

A Charity Athletic Carnival was held on the Williamstown Football Ground on August 26 1956.
Kevan won the long kicking contest with a best kick of 75 yards. 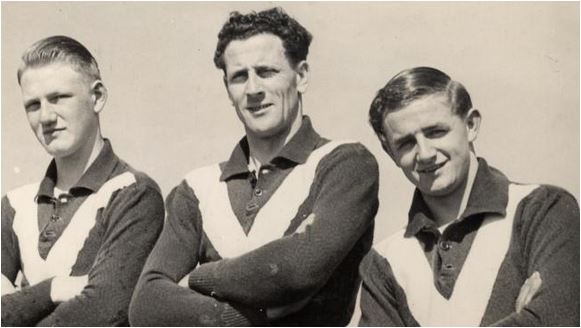 1951 17 y.o. Kevan 'Icy' Hamilton on the right.
A Federal League club, McKinnon's guernseys were royal blue with a white vee, with royal blue & white striped/hooped socks.
Image: Herald-Sun, Google Images
I first remember seeing Kevan playing for the Maccas around 1960. He was as well known as any VFL footballer amongst the kids of Ormond-McKinnon.
To me, he was THE star of the McKinnon team.
Vale 'Icy.'