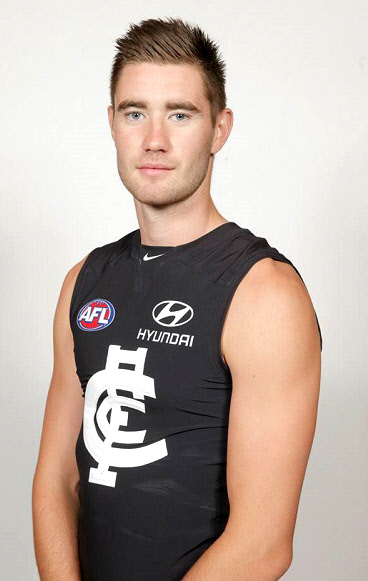 After a disastrous 2014 season that ended with the Blues relegated to 13th position on the ladder, Carlton’s recruiting department came under unprecedented pressure. Retirements, delistings and the defection of Jarrad Waite to North Melbourne had created plenty of space on Carlton’s list, and the club’s supporters were demanding an end to too many years of mediocrity.

During Trade Week in October, the Blues scored a notable coup by picking up 19 year-old GWS Giants key position prospect Kristian Jaksch (along with midfielder Mark Whiley and National Draft selection 19) in exchange for Carlton’s draft selection number 7. Originally recruited by the Giants from the Oakleigh Chargers at selection 12 in the 2012 NAB AFL Draft, Jaksch is a 195 cm, strong-marking utility who can play at both ends of the ground. He joined an exclusive club when he goaled with his first kick on debut for the Giants against Richmond in 2013, but a spate of injuries and the Giants’ talent-laden list had subsequently restricted him to only seven games over two years.

Frustrated by a lack of opportunity, and not lacking in self-belief, Jaksch requested a trade to his home state after the 2014 season, and was courted by a number of clubs before he settled on the Blues. Carlton football manager Andrew McKay was understandably elated to secure two ready-made senior players in Jaksch and Whiley, while still retaining a first-round pick in the upcoming National Draft. “Securing Kristian was certainly a priority for us this trade period, and we're rapt to have gotten the deal done,” McKay said. “We see him as a player who is going to give us another tall marking option, as well as flexibility, given he can play forward and back.” After wearing jumper number 34 at GWS, Kris was allocated number 18 at Carlton and looked forward to wearing it into a senior match for the first time since Paul Bower’s farewell appearance in 2012.

Jaksch suffered an early setback at his new club, however, when he was diagnosed with a stress fracture in the navicular bone of his left foot. Although surgery wasn’t required, he was sidelined for ten weeks and couldn’t take part in full-scale training until January, 2015. Only a few weeks later, he played his first game for the Blues in a pre-season round 1 NAB Cup Challenge match against the West Coast Eagles at Mandurah, Western Australia, before stepping back into the limelight for his senior debut against Richmond in front of 83,000 at the MCG on the opening night of the season.

Starting in defence against the Tigers, Kris was sent forward in the second quarter and kicked his first goal – a neat set shot from 40 metres, wide out on the boundary line. Richmond were relentless after that however, and dominated the second half to win by five goals. After the game, it was discovered that Jaksch had played most of the match with broken ribs – meaning that he could not play again for at least a month.

Meanwhile, Carlton embarked on a season that steadily deteriorated further into misery. As player after player went down with injury and the pressure on the coaching panel intensified, the Blues were hammered from all sides before eventually collecting the wooden spoon. Jaksch managed a total of six games over the season, and was one of a number of Blues who came under scrutiny after Mick Malthouse was sacked as senior coach.

When Brendon Bolton replaced Malthouse ahead of the 2016 season, Jaksch appeared well-placed to benefit, but that proved not to be the case – at least not in the short term. Although he stayed fit throughout the year and played some handy games at both ends of the ground for the Northern Blues, he couldn’t earn a recall until July, when the struggling Blues hosted the West Coast Eagles in a round 17 match at the MCG.

Starting at centre half-forward, Jaksch was hardly sighted and gathered only a few possessions as Carlton lost an even contest by 7 points. He was omitted again the following week, and whilst retained on the list for 2017, failed to play another game. After 14 games across 5 seasons on lists, Jaksch' career was clearly at the crossroads, he would be delisted at the years end.

2018 - Jaksch would line up with VAFA club Old Carey, in 2019 whilst still playing at Old Carey Jaksch would nominate for the 2019 Mid-Season Rookie Draft in hope to rekindle his AFL career.