Carlton were demolished by Collingwood at the MCG in Mick Malthouse's record-breaking match.

Although Carlton coach Mick Malthouse set a new all-time VFL/AFL coaching record in this landmark Friday night encounter against Collingwood at the MCG, his team’s season fell to pieces when the Blues were humiliated by 75 points. Some 66 years earlier, Collingwood’s Jock McHale had coached the Magpies in 714 games over an extraordinary 37 seasons, and Carlton hoped that Malthouse’s achievement in bettering McHale’s mark would inspire the team. Unfortunately for all concerned – both clubs, the AFL and the almost 72,000 spectators who turned up for the occasion, the Blues were only in contention for the first twenty minutes of the match. After that, they were outclassed. 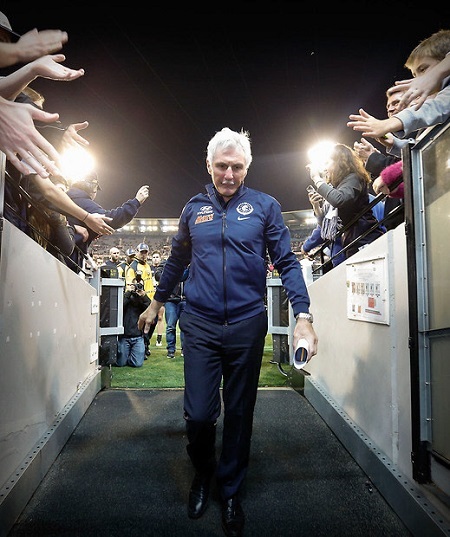 Fresh from a much-needed victory over St Kilda on Anzac Day, Carlton made three changes to the team ahead of this much-anticipated clash. Andrew Carrazzo had succumbed to a leg injury, while Matthew Dick and Levi Casboult were omitted. Into the side came Chris Judd, Kristian Jaksch and first-gamer Mark Whiley. A fourth change became necessary shortly before the match, when Michael Jamison withdrew and Robert Warnock was a late replacement. A spectacular light-show and fireworks preceded Malthouse’s entry on to the field, where he was generously welcomed by fans of both sides.

From the first bounce, the signs were ominous for Carlton, although the Blues drew first blood when former Magpie Cameron Wood kicked the first goal of the game with a snap from a pack after two minutes of play. Carlton’s next major didn’t come until early in the second quarter, by which time the Magpies led by 15 points. Collingwood piled on another five majors in the next 20 minutes, and at half-time Carlton’s deficit had blown out to seven goals. The Blues were in deep trouble – particularly because a centre half-forward, Lachie Henderson was playing injured and could not get his hands on the ball.

Carlton put up some resistance in the third quarter, kicking 3.3 to Collingwood’s 5.2, but when Henderson was substituted out of the game, the Blues were shot ducks and the last quarter became a rout. The Magpies romped away and eventually won by 75 points, prompting Malthouse to declare afterwards, "Unfortunately, I've got to say that that's as disappointing a game as I've been attached to here at Carlton." Sadly for everyone at Princes Park, even worse was in store.

Robert Warnock replaced Michael Jamison in the selected side.