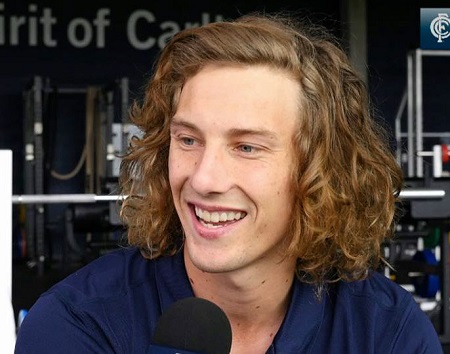 Mark Whiley was a Carlton fan throughout his junior football career around Finley, NSW, before he started turning heads with his tenacity in the midfield for the Murray Bushrangers in the elite Under-18 TAC Cup. In 2010, he was recruited by the GWS Giants as a zone selection, but played only 12 senior games in three seasons, despite remaining injury-free.

Like his then team-mate Kristian Jaksch, Whiley became frustrated by a lack of opportunities at GWS, so at the conclusion of the 2014 season, he requested a trade to Carlton. The Blues negotiated hard to get both players to Princes Park, and eventually a deal was done that saw Whiley, Jaksch and the Giants’ National Draft selection 19 traded to Carlton for the Blues’ pick 7.

Mark made his senior debut for the Blues on a huge night at the MCG against Collingwood in round 5, 2015, when Carlton coach Mick Malthouse set a new AFL games record of 715 matches. Over the rest of that season Whiley played seven more games in guernsey number 24, highlighted by his 19 disposals, 6 clearances, 4 tackles and 5 hit-outs in a notable all-round effort against his former club in round 22. By then however, the Blues were on the verge of collecting another wooden spoon, and Malthouse had been shown the door after a short and turbulent stay.

In 2016, when Brendon Bolton succeeded Malthouse with the huge task of rebuilding a shattered team, Whiley might have expected more opportunities and more responsibility, but it didn’t work out that way. After playing his only senior match for the year against the Gold Coast Suns in round 3, he was dropped, then tore a calf muscle in his very next VFL game for the Northern Blues and missed a vital month of football.

Although he recaptured form late in the year and was named as an emergency for the Blues on a couple of occasions, the season never really got going for Mark, and his brief stay at Princes Park ended in October when he was one of a dozen players delisted.

Whiley would line up for Ovens and Murray Football League club Yarrawonga for the 2017 season.