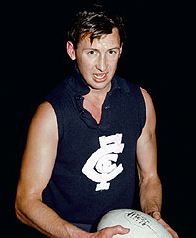 
In many ways, Maurie Sankey was the predecessor of Peter ‘Percy’ Jones. Another popular, big-hearted Tasmanian-born ruckman, he left an indelible mark in his time at Princes Park before he was tragically killed in a head-on car crash, only a few weeks after playing his 100th game for the Blues.

Sankey was recruited from the Latrobe Football Club in 1958. Wearing guernsey number 44, he played his first senior game for the Blues the following year, and did so well in his three appearances late in that season that he was offered number 16 for 1960, and wore it for the rest of his career. By 1962, Maurie was entrenched in a very good Carlton team that made the finals in fourth place on the ladder. A genuine tall all-rounder, he was a more than handy tap ruckman who marked well, and could play at either end of the ground. But what endeared him to Carlton supporters most of all was his honest, whole-hearted approach to his football. Week after week, Maurie gave his all for the Blues in victory or defeat. And his dry sense of humour inevitably lifted his team-mates in tough times. 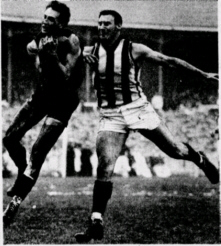 Sankey’s career peaked in the 1962 finals. Carlton beat Melbourne, then fought a Preliminary Final draw with Geelong. In the replay, a controversial free kick to Carlton full-back Peter Barry - against champion Geelong full-forward Doug Wade, in the last minute of the match - gave Carlton victory by just 5 points. But those three gruelling games in succession flattened the Blues, who ultimately were no match for a fresher, fitter Essendon in the Grand Final. Despite that loss, Sankey was a standout for Carlton in each of his four finals games, and his stature within the club was confirmed when he was appointed vice captain to Sergio Silvagni in 1964.

Although Silvagni and Sankey were two of the most popular leaders in Carlton's history, the Blues had a miserable season in '64, to wind up tenth on the ladder. Rumblings of discontent quickly snowballed into a coup late in the season, and culminated in the club committee being overthrown. Under the Presidency of former club dentist George Harris, the new administration then stunned the football world by appointing Melbourne champion Ron Barassi captain-coach of the Blues for five years from 1965.

Barassi's iron-fisted discipline had an immediate effect, lifting the Blues to sixth in his first year, as John Nicholls, Silvagni, Sankey, rover Adrian Gallagher and Barassi himself began combining into a formidable ruck combination. However, in November of that year - just a couple of weeks after Essendon had comfortably beaten St Kilda for the flag - the Carlton Football Club was plunged into mourning with the news that Maurie Sankey, at the age of just 25, had been tragically killed in an horrific head-on collision.

Articles: Tragedies in Blue | Finding 'Sankey' - the search for a signature