The Blues ended their 3-game losing streak with a crushing victory over a hapless Port Adelaide. Carlton's midfield was totally dominant, with Hickmott, Bradley (39 possessions) and Camporeale (44 possessions) leading the way. In a match-winning move, Brett Ratten played forward and kicked 6 goals - three in the first quarter.

Ruckman Matthew Allan had a great game too, easily outpointing Port's big men in Matthew Primus and future Blue Barnaby French. The lead had blown out to a huge 115 points in the last quarter, before Port kicked the last 4 goals to save some face. 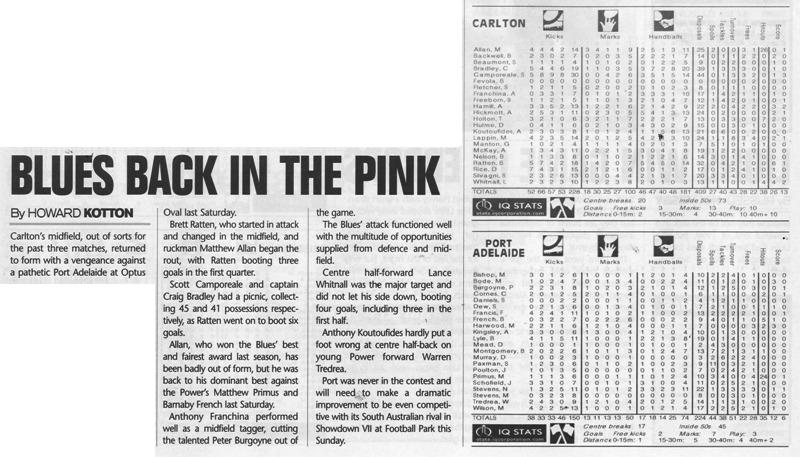 100 Goals : Scott Camporeale
Score Records : This is Carlton's highest ever score and greatest winning margin over Port to date.
Score Records : This was the first in a run of 13 wins in a row, Carlton's second-best winning streak on record
Interesting Fact : Carlton's 10-goal third quarter was the first of three times we would score 10 majors or more in a quarter during 2000, and it wouldn't be done again for a decade - until Round 19, 2010.