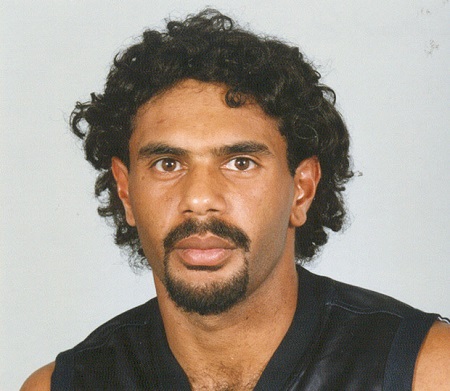 Another of the many gifted players of aboriginal descent to have graced the game of Australian Rules Football, Sean Charles represented three clubs in an eight-year career between 1992 and 2000. Unfortunately for all concerned however, he was never comfortable in the spotlight, and his one game with Carlton ended before it even started when he suffered a broken leg.

Originally from Powelltown, in the Yarra Ranges east of Melbourne, Charles was an outstanding schoolboy footballer who was already playing at elite level with the Eastern Ranges Under-18s when he was signed by Melbourne. Promoted to the Demons’ senior list just a week after his 17th birthday, he made a sensational debut when he kicked five goals against North Melbourne in round 10, 1992.

Over the following five seasons, however, Sean found increasing difficulty in coping with the demands of professional sport. Shy by nature and never comfortable in city life, he hurried back home at every opportunity, and regularly didn’t return on time. But when he did take to the field fit and confident, he could be electric – as he showed with a dynamic game against Carlton in the 1994 Qualifying Final. Melbourne shocked the Blues that afternoon and won by 27 points, with Charles kicking five goals against one of the strongest defences of all time.

Injuries dogged Sean throughout the rest of his time at Melbourne, in particular a chronic wrist injury that required three separate operations in 1995 alone. He played all but four of Melbourne’s games in 1997, but it was painfully obvious that his confidence was down, and at the end of that season the Demons cut him loose. Meanwhile, Carlton still had vivid memories of Charles’ exploits three years earlier, and jumped at the chance to get him to Princes Park.

Handed the number 10 guernsey worn previously by Barry Mitchell, Sean was diligent in his preparation for the new season. Looking confident, he ran out onto Princes Park for his first game for his new club against Adelaide on Saturday, March 28, 1998 – only to suffer an horrific injury in the first quarter when his team-mate Mark Porter fell across one of his legs, and broke it in a couple of places.

After surgery, Charles made a determined start to his rehabilitation program at first, until the discipline required became all too much and he began missing appointments. The situation reached breaking point early in 1999, when he didn’t turn up for pre-season training, and so his contract was cancelled by mutual agreement.

Later that same year, having fully recovered, Sean pulled his football boots back on and turned out to play for Woorinen, near Swan Hill. After getting through the season unscathed and with his passion for the game restored, Charles caused another surprise by nominating himself for the Pre Season Draft. St Kilda took a punt on him with their last pick (no. 15) and he went on to add another eight matches and six goals to his career tally in two seasons at Moorabbin, before he was delisted for the last time at the end of 2001.