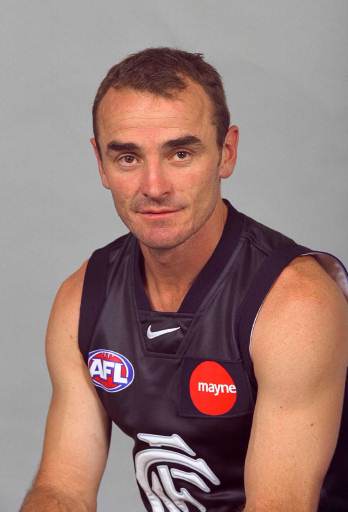 Throughout the latter years of his career with the Sydney Swans between 1984 and 1992, Barry Mitchell forged a reputation as one of the outstanding rover-forwards in the game. Determined, courageous, and with excellent disposal skills by hand or foot, he represented both NSW and Victoria in interstate matches. In 1991, he was named All Australian, and capped off his most successful year by winning the Swans’ Best and Fairest.

A year later, Mitchell was almost out of contract with the Swans, and Collingwood launched a spectacular bid to lure him back across the Murray River. Born in Yarrawonga, Barry had played junior football at Mulgrave prior to being drafted by Sydney, so it was no secret that he intended to return to his home state when his playing days ended. Collingwood’s offer – rumoured at the time to be around $300,000 per year, plus bonuses – brought Mitchell’s plans forward, and in 1993 he became a Magpie.

For both parties however, it proved to be an unwise move. Barry found it difficult to adapt to Collingwood’s culture and game plan, and after just one season of 13 senior games and eight goals, he requested a release. Meanwhile, over at Princes Park, the Blues were still coming to terms with their shock defeat by Essendon in the 1993 Grand Final. At the right price, Mitchell appeared to fit neatly into Carlton’s plans, so a deal – which required Collingwood to subsidise his contract - was eventually done.

Assigned guernsey number 10, Mitchell played his first game for Carlton on a calm Saturday night at Football Park in Adelaide when 1994 began for the Blues with a humiliating 66-point defeat by the red-hot Crows. Sharing the roving duties with Brent Heaver, Mitchell could do little to halt the South Australians and their star full-forward Tony Modra, who dominated the game and kicked a staggering 13 goals.

Despite that flogging, the Blues recovered to finish second on the ladder by seasons end, only to be tipped out of the flag race by consecutive losses to Melbourne in the Qualifying Final, and by Geelong in one Semi Final. Carlton’s capitulation in those games was heavily criticised within and without the club for a long time afterward. Many blamed a lack of pace for the team’s failure, and the focus was directed squarely at Mitchell and his roving partner, Adrian Gleeson.

Perhaps because of that, Mitchell faced an uphill battle to retain his spot in the side in 1995. His first five games for the year all came from the bench, but then he turned back the clock and was a star in the Blues' huge win by 102 points over Hawthorn in round 10. Capitalising on the ruck supremacy of Justin Madden, Mitchell gathered 37 possessions and kicked two terrific goals in a vintage performance. That Best on Ground seemed to have resuscitated his career – until a late-season form slump proved so very costly. He was omitted from the team after round 16, and from then on, played out the year in the Reserves. Meanwhile, the rampaging Blues swept to the 1995 Premiership, completing one of the most dominant seasons in VFL/AFL history.

Mitchell concluded the third and last year of his contract in 1996, playing another four times from the bench late in the season. His 221st and last career game came in round 21, when fifth-placed Carlton accounted for wooden spoon contenders Footscray by five goals at Princes Park. Before he hung up his boots for good however, he was a very good contributor again in the Reserves’ ultimately unsuccessful finals campaign.

Having developed a close relationship with Carlton Reserves coach Wayne Brittain in ’96, Mitchell spent the immediate years after his retirement acting as the senior team’s runner – a role that continued through to 2004, when he himself was appointed as coach of the Blues’ VFL affiliate, the Northern Bullants. By then, ex- North Melbourne Premiership coach Denis Pagan had taken over as senior coach at Princes Park. Unfortunately for all concerned, the relationship between he and Mitchell was never a warm one.

In 2007, Mitchell left Carlton to take up an offer from Hawthorn. As coach of the Box Hill Hawks, he played a significant role in Hawthorn’s march to the 2008 AFL Premiership, and that in turn brought a number of approaches from other clubs. Having achieved the ultimate with Hawthorn, Mitchell stepped up to another challenge and joined the Fremantle Dockers as assistant coach in 2009.

In August 2010, the Mitchell name made the sporting pages again when Barry’s 17 year-old son Tom Mitchell agreed to join Sydney at the completion of his studies in 2011. A left-footed midfielder from Hale College in Perth, he was regarded as an outstanding prospect, and showed that that opinion wasn't far wrong when he made an impressive debut for the Swans in 2013 against Essendon.