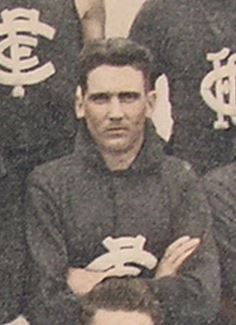 
The highlight of Vincent Lionel (Vin) Arthurs’ interrupted career at Carlton was the Blues’ crushing victory over Collingwood in the 1931 first Semi Final. On that special afternoon at the MCG, Arthur’s relentless attack on the ball at half-forward provided a constant avenue to goal for the Blues, and full-forward ‘Soapy’ Vallence reaped the benefits with an 11-goal haul. Vin kicked three majors himself, as Carlton tore their fiercest rivals to shreds in a record victory by 88 points.

By then, Arthur was in his fifth season of a VFL career that began at St Kilda in 1926. After 16 matches for the Saints, he had crossed to Princes Park in 1927 to take a different path on a football journey that would eventually include finals appearances for Carlton in four of the next six years.

Although he was born in suburban Prahran in 1905, Vin Arthur was raised in the country. He learned his football at Drouin before moving back to Melbourne, and was playing for Richmond District in 1925 when St Kilda recruited him. His pace and build were ideal for a wingman of that era, and his tenacious ground play made him a difficult opponent.

He was a regular member of the senior team at Carlton throughout 1927 and ’28, then surprised the club by announcing that he was leaving to join South Bendigo. The Blues let him go, but kept his number 30 guernsey on hand for him - just in case he changed his mind. That is just what he did in 1930, coming back in time to be among our best players in a hard-fought, 20-point Semi Final loss to Geelong.

In 1931, Blues’ coach Dan Minogue shifted Arthur to a half-forward flank, where his career peaked in that crushing Semi Final victory over Collingwood, the defending Premiers. Greater glory seemed to be beckoning, too, when the Blues slammed on 7 goals, 5 behinds - to nothing - in the first quarter against Geelong in the following week’s Preliminary Final. But after the first break in that pivotal match, the Cats were unstoppable. While Carlton got the staggers - kicking only four more goals in the match - Geelong hauled themselves back into the contest, and won a classic encounter by six points.

Sparked by the memories of that devastating loss, the Blues surged to the top of the ladder in 1932, only to be comfortably beaten by Richmond in the second Semi Final. Vin played in the centre against the Tigers, but was hardly sighted. As a consequence, he was dropped from the team for the rest of Carlton’s finals campaign, which culminated in another narrow, heart-breaking defeat by Richmond in the Grand Final.

After that, it was obvious that Arthur’s future at Carlton wasn’t guaranteed. He saddled up again in 1933, but played just once more for the old Dark Navy Blues – in a scrappy, 8-point win over Hawthorn at Glenferrie Oval in early May. By then, he was only a month or so past his twenty-eighth birthday, yet apparently retired completely from any level of suburban or country football from that day on.

Seven years later, Australia was drawn into World War II by her allegiance to Great Britain, and Vin Arthur was among the many thousands of volunteers who signed up to fight for King and country. He joined the 2nd AIF in June 1940, and spent three years in northern Australia with an anti-aircraft regiment.

Vin got through the war in one piece, and came back home to enjoy the peace and eventual prosperity of the post-war years. Sadly, he passed away in November, 1970, at the comparatively young age of 65.