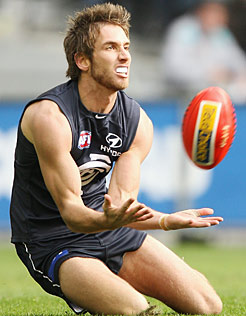 Brad Fisher was one of those draft pick gems that pop up late in the order. Taken at number 72 in the 2002 National Draft, he made 99 senior appearances and booted 127 goals for Carlton in eight injury-plagued seasons. Courageous, and an often freakish high mark, he richly deserved to be remembered as a 100-game Blue (and went to great lengths trying to achieve that honour) but in the end, his fragile body let him down.

Fisher’s path to Carlton led from his junior club East Burwood, to the Eastern Ranges in the elite level TAC Cup Under 18 competition. From there he was drafted by the Blues, and assigned guernsey number 14. He was carrying a completely different number however, when he created real excitement in his first match at VFL level by kicking six big goals on debut for the Northern Bullants. Typical of Blues-listed players at the lower level, “Fish” wasn't wearing the number 14 that day, nor the number listed next to his name in the single page handout available at Cramer St Oval. Instead, he thrilled the crowd in jumper number 36 – which only added to the confusion, because that was usually carried by one the Bullants’ real stalwarts, Josh Vansittart!

That sparkling first-up effort brought an immediate call-up to Carlton’s senior side, and Fisher officially became a Blue on the huge stage of Friday night football at the MCG in round 2, 2003. Carlton took on Collingwood that night, putting up some spirited resistance before falling by 16 points. Brad started on the bench, came on to take a couple of impressive grabs, and kicked his first career goal.

He held on to his place in the side throughout the remainder of a bleak year for Carlton, and despite a couple of minor problems with a knee and shoulder, ended up playing 16 games in an excellent debut season, highlighted by his AFL Rising Star nomination for his solid effort in Carlton’s win over Richmond at the MCG in round 12.

However, while his 18 goals, 5 behinds for the season was a remarkably accurate result on paper, alarm bells were already ringing in regard to his kicking style and its effectiveness. It was plain that nerves regularly got the better of Brad in front of the big sticks, and if he didn’t kick truly with his first or second attempts, he was usually shot for the day. On the other hand, his marking was often breathtaking. Reminiscent of another of Carlton’s stick-thin aerialists in Ken Hunter, he was equally adept at drifting across the front of packs, or coming over the top from behind to take one-touch grabs with superb judgement.

Fisher’s second season in 2004 brought pleasure and pain. He found a niche on a half-forward flank, notching up 15 games and 16.9, before Carlton lost to Fremantle at Princes Park in round 18, and Brad suffered a footballer’s worst nightmare – a torn anterior cruciate ligament in his right knee that sidelined him for the best part of 12 months. After a conventional recovery process, he made it back into harness for round 16, 2005, and played out the seven matches remaining. In a valuable cameo role, he averaged six marks per game, and contributed 13.8 as a lively forward option.

Injury plagued Fish again in 2006, beginning with a hamstring strain in round one that cost him two games, and a shoulder problem in round 7 that sidelined him for another six weeks. As the Blues continued to struggle, Brad played much of that year up the field, outside of the forward 50, as a link-up option. In 13 matches he kicked 7 goals, and brought up his 50th career game in a disappointing loss to Collingwood in round 21.

Brad had an encouraging start to 2007, kicking four goals when Carlton beat Brisbane in the pre-season NAB Cup Grand Final. For a while it seemed that his injury woes might be behind him at last, until he copped a heavy knock against the West Coast Eagles in round 4, and fractured a cheekbone. In his return match against Collingwood in round 7, he suffered another hard blow to the body, but saw out the remainder of the year until another knee ligament strain ended his campaign in round 21. In his most productive season so far, he had contributed 39.15 from his 19 games, including a personal best haul of four majors against Essendon in round 20.

At year’s end, Brad was rewarded for his on-field achievements as well as his work within the community (and the manner in which he represented the club on and off the field) when he was named Player Ambassador of the Year. He also managed his first top 10 placing in Carlton’s Best and Fairest award, finishing seventh.

Then, just as it seemed that the football gods were smiling on him at last, injury woes re-appeared when Fish suffered a broken thumb in the first round of the 2008 NAB Cup. Although that break was to hamper him for months, he was passed fit enough to play in round 2 against St Kilda; taking 10 marks, collecting 18 disposals at 83% efficiency, and booting 2 goals. He was important again in Carlton’s welcome round 4 victory over Collingwood (when he took an equal career-high 13 marks) and a fortnight later steered through his 100th goal in Carlton’s loss to Adelaide. The Blues may have remained moored on the lower rungs of the AFL ladder by season’s end, but at least Brad could look back on another productive year in which he had kicked 25 goals in 21 games.

In 2009, a pre-season elbow injury kept Fish out of Carlton’s senior 22 until round 10, when he provided a viable forward target and booted three goals to help the Blues to a 41-point victory over West Coast at Docklands. But thereafter, he fell into a form slump, and made only six more appearances in navy blue for the year. He finished the season back with the Bullants, playing in their Grand Final team that was beaten by North Ballarat. 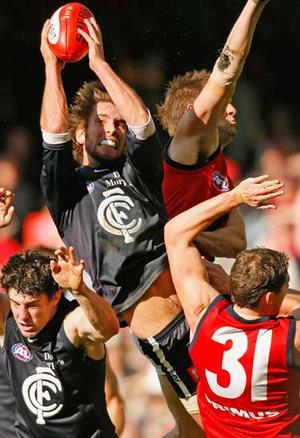 Just when the worst decade in the history of the Carlton Football Club seemed to be over, the club plunged back into turmoil over the 2010 pre-season. With wayward full-forward Brendan Fevola packed off to Brisbane, and the Blues looking to create an all-new forward structure, it was expected that Fisher would get plenty of opportunities to rack up his 100th game sometime during the year. Sadly, that was not to be.

Brad’s hopes of a return to his best were shattered during the first half of Carlton’s NAB Cup match against Sydney, when he crashed to the turf in pain and was carried off clutching his right knee. That night the news that he required a full reconstruction of the same knee that he damaged in 2004 was met by widespread dismay among Carlton supporters, and many wondered if he would ever play for the Blues again – especially because he was out of contract at the end of that year. His prospects were suddenly looking grim indeed.

But Brad was nothing if not determined, and he elected to undergo a radical reconstruction procedure called LARS (Ligament Augmentation and Reconstruction System) in a bid to get back on the field before the finals, and at least have a shot at another contract. The operation went smoothly, and Brad returned to the field for the Bullants an amazing 14 weeks later.

After again kicking a lot of goals at VFL level, he made his return to the Carlton side for his 99th game in round 18, 2010 against Collingwood, but was hardly sighted as the Pies inflicted perhaps Carlton’s worst defeat for the year – a 48-point thrashing in front of almost 77,000 fans at the MCG. It was an insipid performance by the Blues, and it couldn’t have come at a worse time for Fisher. One of three omissions from the team the following week, he went back to the Bullants and promptly kicked ten goals in his next match – but his chance had come and gone.

He wasn’t selected again in the Carlton side before the Blues finished their 2010 campaign with a heart-stopping Elimination Final loss to Sydney, and only a few weeks later Fish was officially informed that his contract would not be renewed. A very popular and respected member of the Carlton family, Brad still had plenty of good football left in him however, so it wasn’t long before offers from clubs all over the country were rolling in.

In December 2010, Brad signed with SANFL club West Adelaide, and was re-united another former Blue in Adam Hartlett.