Carlton escaped with a 6-point win over Footscray at the Western Oval.

A sluggish Carlton team narrowly avoided defeat by Footscray in this dull affair at the Western Oval. The visitors kicked 1.3 to 3.1 in the last quarter, and fell in by 6 points.
One of the few consolations to come out of the game was that the Blues still clung to second ladder position behind the in-form Richmond, who smashed South Melbourne at the MCG, and took over outright ladder leadership. St Kilda, Essendon and Hawthorn made up the top five.

Carlton's effort against Footscray left a lot to be desired. In fact, it wasn't much better than last week's performance against Hawthorn as far as production from their better class of footballer was concerned. Nine of the Carlton players were unable to get to double figures in the kick department. Fellows like Brent Crosswell, Andy Lukas, David McKay, Paul Hurst, Peter Jones and John Nicholls not contributing much throws a great deal of pressure on the others. Alex Jesaulenko continued on his merry way. He is the type of player that attracts crowds. Footscray think that their side was unlucky, but unfortunately excuses don't win games. - Polly Farmer; The Australian.

We seem to to have lost the keenness and edge we had in our first nine games of the season. I felt we looked like winning all day, but we did not play well as a team because there was no backing-up or talking. - John Nicholls. 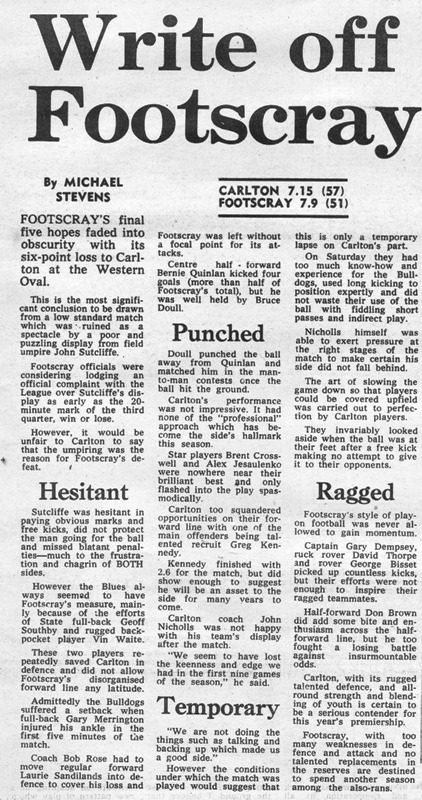 
Brent Crosswell injures shoulder during the third quarter.
Image: Age June 12
Round 10 | Round 12