Carlton lost to Collingwood by 24 points, after farewelling Anthony Koutoufides at the MCG.


Carlton organised a ‘Tribute to Kouta’ prior to this match, and many of the 56,000 who turned up to the MCG on this Saturday afternoon were there for one reason - to say goodbye to one of Carlton’s greats. With both teams lining the boundary, Anthony was driven on a lap of honour as the cheer squad and many in the crowd chanted “Kou-ta, Kou-ta” one last time. Remarkably, even some of the Collingwood cheer squad were gracious enough to clap as he drove past. 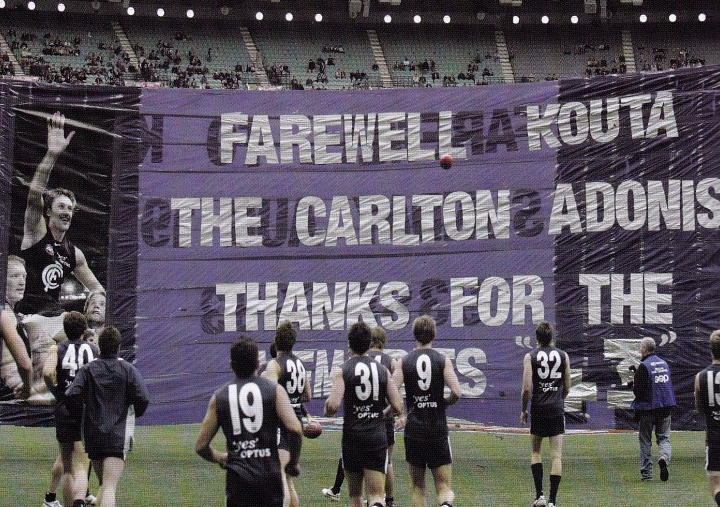 This 235th meeting between Carlton and Collingwood was a typically tight encounter that was only broken open by the more fancied Collingwood team in the final quarter. In fact, the Collingwood line-up for the game - despite three late changes that Magpie fans would argue were important, but to the footy world at large were irrelevant - had almost double the experience of games played, compared to the young Blues line-up.

Carlton started the game very well and controlled much of the opening term. They were on top in virtually every statistical column with the exception of hit-outs. It was a joy early to see the kids, with Ryan Jackson impressive for a second straight week Debutant Michael Jamison also did some good things, and never looked out of place, whilst eighth-gamer Paul Bower managed eight stats and a couple of beautiful spoils in a strong first term. In reality, Carlton should have ended the quarter with a bigger lead, especially after an audaciously-dribbled goal from Jarrad Waite that was delicately placed between opponent and umpire from the left forward pocket. But finishing in front of goal let the Blues down, as the lead changed several times in a gripping contest.

The second quarter saw glimpses of Collingwood's on-paper superiority, although their lead was never too great. Carlton always had enough fight, and more importantly, talent, to keep their opponents within reach. Although the Blues rucks were being beaten, the midfield and defence were holding up well, and the Pies big forward Anthony Rocca was nowhere to be seen. Andrew Carrazzo, Heath Scotland and Kade Simpson were winning plenty of ball for the Blues, with the latter two mopping up in the defensive 50 time after time. Therefore, there was only a seven point deficit facing Carlton at the main break.

The struggle continued in the third term, as the Blues came out blazing to kick four goals and snatch the advantage at three-quarter time. Rocca was still being well held, but Travis Cloke was proving harder to contain as the match wore on, and it was the monster forwards of Collingwood that would eventually decide the outcome.

Collingwood opened the fourth quarter with an open forward line and the intent of isolating the smaller Jason Saddington against Rocca, and it worked. Rocca kicked two early goals, forcing the change of Saddington for the taller Setanta Ó hAilpín. That swap provided immediate dividends, as majors to Saddington and Brendan Fevola tied the game up at 95 points all, before the big effort began to take its toll on the young Blues and Rocca took over as Collingwood landed four unanswered goals in last eight minutes to run out victors by that margin

Despite the sour taste of another gallant defeat, some positive signs for Carlton included the debut of Michael Jamison who had the better of his opponent Paul Medhurst, while Brett Ratten’s astute coaching and his willingness to give his younger players real opportunities won him kudos from many supporters. In fact, Ratten would remark after the game that this team was the youngest for 37 years (although the team the following week was even younger still). The details and ages of the individual players who wore the navy blue on this particular afternoon are explored here.

Better players for Carlton included Jordan Russell, who was impressive in stages, as well as Andrew Carrazzo who again kept the stats men busy with 36 disposals. Heath Scotland racked up 31 touches, including a text book bullet-like pass to Fevola in the last quarter resulted in one of Fev’s 6 goals. All of a sudden, Carlton's list did not appear as poor as many media pundits had declared. There was some promising youth coming through, even if older and wiser heads were few and far between. Indeed, it was Jason Saddington - in his 157th game - who was the most experienced Blue on the day.

Debut: Michael Jamison
Stand-in captain: Kade Simpson continued in the role of skipper for this game
Interesting fact: This was the youngest Carlton team for 37 years, and amongst the 20 Youngest Carlton teams in history. Amazingly, the team in subsequent weeks would be even younger.